CYRUS ALBRIGHT
What is the logical course of action? 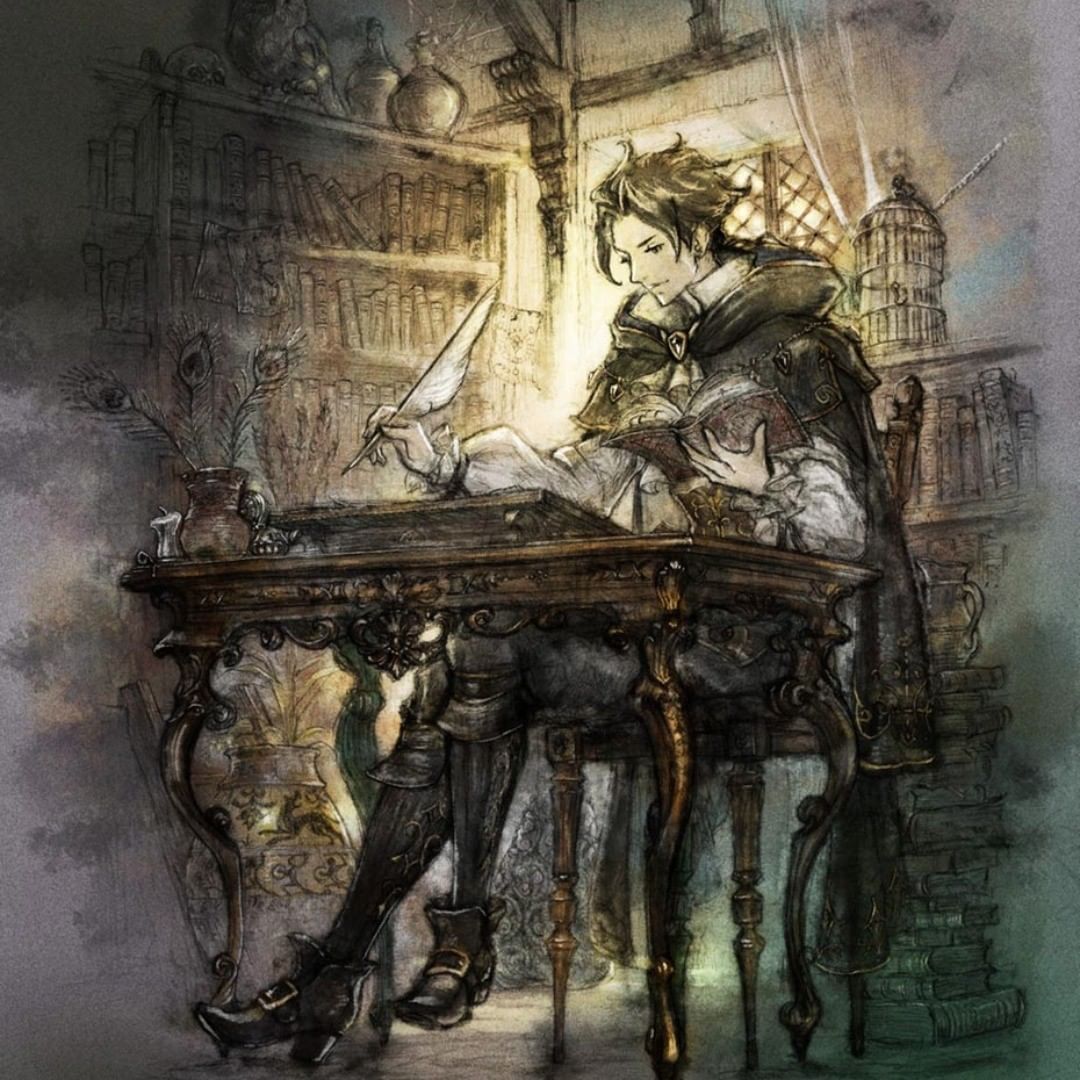 Fandom: Octopath Traveler
Age: 30
Species: Human
Gender: Male
Canon Point: As he's about to head into class at the end of his story
NPC Companions: None


SKILLS & ABILITIES
Scrutinize: Cyrus is gifted with an inquisitive mind and excellent deduction skills. He can pick up on subtle things on a person and find out a lot about a person through a simple conversation. He particularly enjoys to attempt to guess what other people are thinking, as it's both a fun exercise and a way to sharpen his mind. Lastly, his perception is such that he's capable of finding a weakness in his opponents just by looking at them.

As a Scholar, Cyrus is gifted with powerful elemental magic that's particularly fit for dealing with large crowds of enemies at once.
Apothecary:

Being still a novice, Cyrus is not the greatest at concocting potions and the like just yet, but he still picked up some of the general skills of being an apothecary.
 Equipment
Cyrus carries with himself a wizard's staff and a spell book for helping cast his spells, but he's also armed with an elemental hatchet, an axe that's not too strong, but compensates by being useful as a magic enhancer as well, though not as good as his staff.

Lastly, Cyrus carries a satchel around, where he keeps his apothecary medicine and the tools to concoct them.


WEAKNESSES
Cyrus, being a mage, is not the most physically capable fighter, although he definitely should not be underestimated even then. Not only that, but he needs a little time to cast his spells, which means there's a brief period of time where he's vulnerable to enemy assaults. He's also a human like any other, meaning anything that can kill a regular person can also kill him if he's not careful.

On the topic of personality flaws, Cyrus is dreadful at picking up on his own charms and the effect it has on women, being utterly unaware of any feelings of attraction towards him. He can also be a bit pushy and nosy when inquiring for information, which can lead to people getting mad at him for it.

FREEFORM
Life is filled with all kinds of strange twists and turns. It's truly unpredictable in the best and worst of ways and I have no regrets regarding the choices I made. In fact, I dare say it all worked in my favor, in the end.

I never would've thought that a small series of book thefts at the special archives of the Atlasdam library would've led to me discovering something far greater and dangerous. A search for a single tome, lost for over a decade, ended up exposing me to evils I never thought I would personally come across.

My quest is now complete, however, and my life as a mere teacher at Atlasdam has resumed without a hitch. My thirst for knowledge has only grown all the more insatiable, however, but if there is one thing that my journey has made very clear to me, is that there's a thin line between passion and obsession, and I strive to ensure that I never cross into the latter territory. The knowledge I pursue has to be put in use for good, and I refuse to allow myself to succumb to the darkness that lurks inside the hearts of men like those before me.

The biggest surprise of all, however, were all the people I had the honor to call my companions during my quest. I believed my journey was going to be a lonely one, but in the end, I had the help of seven other travelers, each with their own quests and ambitions to fulfill. I learned a great deal by aiding them in their quests and I wouldn't have changed anything about this wondrous experience.

Sister Ophilia, one of the kindest souls I ever had the honor to meet. Her pure heart was more than fitting of being the Flamesbearer, even though she wasn't meant for the role at first. Indeed, her adoptive father's illness and her sister's grief over his deteriorating state pushed her to take on the burden of the tradition known as the Kindling all so her sister could stay by her father's side. Truly, a fine example of the goodness in people's hearts.

H'annit, a huntress with the ability to commune with animals. She speaks in a way that most would consider outdated, but I personally found it quite charming. Her master seemingly disappeared while on a hunt for a most terrifying creature known as Redeye and she embarked on a journey to find him, alongside her loyal companion, the snow leopard who goes by the name Linde. Certainly one of the most unique people I ever had the pleasure of meeting.

Therion, a troubled soul who lives the life of a thief. Not the kind of person I would usually associate myself with, but his journey was more or less forced upon him. That being the quest to find the lost dragonstone, a journey not unlike my own. Although he was often distant and even a little… too honest at times, I could tell that there was a warmth hiding under the surface, one that was, tragically, too afraid to make itself known in more than a handful of occasions.

Alfyn, the other kindest soul I ever had the pleasure of meeting. A scruffy young man who was, as a child, saved from a terrible plague by a wandering apothecary, free of charge. This left quite a mark in his heart and inspired him to become an apothecary himself. He strives to follow his role model, going anywhere to find those having their lives seeped away from them by disease and injury, using all of his knowledge and heart to prepare salves that will save their lives, all without asking for any form of compensation. The level of generosity in Alfyn's heart is unfathomable and yet, it is as real as it can be. I was moved enough by his dedication to his trade that I even asked for him to teach me some of it, with the hopes that, if the situation arises, I too will be able to save the lives of people in need.

Primrose, the daughter from a long lost noble house. She is certainly a woman you do not want to have as an enemy, but despite how frightening she could be towards her enemies, towards us, she was gentle and kind, showing that even the dreadful pain she had to endure until an opportunity to pursue her revenge arrived was not enough to smother the warmth that lied inside her heart. Her dancing was absolutely beautiful to watch as well, a skill that I couldn't help but envy about as much as I admired it.

Olberic, the legendary knight from the fallen kingdom of Hornburg. As someone with a deep fascination with history, getting the chance to meet such a figure was nothing short of a dream come true. The man's skill with a sword also could not be overstated enough and certainly was befitting of his fame. His quest to uncover the truth behind the fall of his beloved kingdom, as well as the assassination of his liege, is something I consider a honor to have been part of.

And finally, Tressa. The youngest out of all of us, but certainly among the ones with the most heart. Her passion for trading and all the merchant principles reminds me of my own passion for my job as a scholar. The glint in her eyes whenever she starts a negotiation, her compassion for those she sells her wares to, her unwavering energy as she searches for treasure… an exemplary youth, if there was ever one.

I do not regret meeting these people in the slightest. Traveling with them enriched my life in ways that I never would've been able to predict. Their journeys brought me many opportunities to learn, solve mysteries that I hadn't considered before, and yet I still feel like there's so much more I still need to know.

For that purpose, my journey in search of knowledge continues, and it will likely be ongoing for the rest of my life.

I, for one, cannot wait for it.

your application is
ACCEPTED

You know what this gif is for.

Chip
Thanks for everything, Pandora! If you would ever like to talk just add me on mirai#0007
Yesterday at 1:56 PM •••

Octi
what do you do when you are pretty constantly caught up? you write more charries, obviously!
Yesterday at 10:43 AM •••

Billyboy
"...Whoever said 'Silence is Golden', obviously never needed friends or family around."
Thursday at 8:10 PM •••

Rik-Rik-Ree
tfw the anole in your house keeps outsmarting you. #FloridaProblems
Thursday at 7:11 PM •••