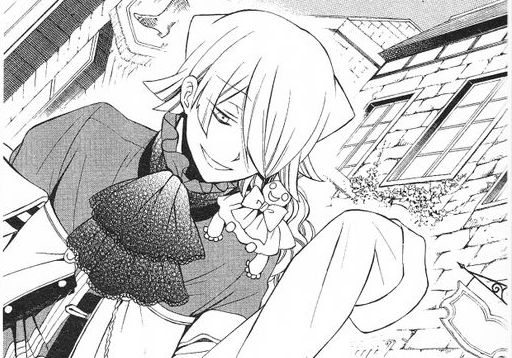 
SKILLS & ABILITIES
Break possesses some amount of magical ability. He has been shown using a magic circle to trap a contractor.

Having descended from a long line of knights, Break is very skilled with a sword, being able to use his thin blade to deflect a much bigger one.

Break formed a legal contract with a chain called the Mad Hatter. This chain specifically negates the power of everything that came from the Abyss. In other words, it’s a chain specifically meant for killing chains. Break is able to concentrate his power on his blade or his body, so if he is touching someone with a contract, he can make them unable to use their own chain.

Since Break has red eyes, he is also a child of misfortune.

 Special AbilitiesBreak often appears and disappears out of closets or underneath tables. He can also perform other strange tricks, such as making a dove appear from a hat.
 EquipmentBreak has a Black cane that, when unsheathed, becomes a blade.
 NPC’s AbilitiesEmily is the doll that sits on Break’s shoulder. It is able to perform simple movements, but not large ones such as running or jumping. It may also have the ability to speak, though it is more likely that Break is acting as a ventriloquist.


WEAKNESSES
While some contractors do not age as a result, it still takes a toll on their bodies.

Because Break’s contract with his chain is his second one, his body undergoes a lot more strain. When he uses the chain’s power, his body is severely affected to the point where he will cough up blood. Also because of the effects of his second contract, Break is blind. He is still able to differentiate objects in front of him though, but not details or patterns. He has stated that he will lose the ability soon too. In addition, he is also missing his left eye.

His condition noticeably worsens near the end of the manga.

Break is very good with a sword; however, he does not have much experience fighting in a group, and may accidentally injure his partner.

Similar to others, when in contact with prometheus dust, Break will be unable to use his chain’s power.

Instead of consuming the blood of a chain to forge an illegal contract, legal contracts are formed by soaking a blood seal mirrors, created by the Pandora organization, in the chain’s blood. Thus, if Break’s is ever broken, his contract with the Mad Hatter will end.

PERSONALITY
Break is lighthearted, and sometimes creepy and unsettling. If the situation is serious, his actions will reflect that, and he will stop acting so carefree. He does care greatly about the people around him, but there are also those he hates, which is freely expressed. Even if something happens to those he cares about, and he is greatly saddened, it won’t be shown, instead turning to anger and revenge.

He has a sweet tooth, always carrying a seemingly endless amount of candy with him.

Break has a strong will. He has said that he will not let himself die until he fulfills his goal, which also makes him in a rush to do certain things. If he were to choose between his friends or his goal, he would still prioritize his friends. His determination to stay alive forces him to stay sober, regardless of how much he drinks.

Break understands that looking to the past will not bring happiness, since he has already tried to do so before, so he can get angry when others try to do the same. When people don’t listen to him, he can get frustrated as well, even insulting them.

OPTIONAL HISTORY
Break previously served the Sinclair Family, a minor noble house roughly 30-50 years prior to chapter 91 of the manga. At this time, his name was Kevin Legnard.

One day, while out with the family’s youngest daughter, the entire family was killed. This engulfed Break in despair, and a chain, Albus the White Knight, forged an illegal contract with him. Having heard that he would be able to revive his master if he met with the Intention of the Abyss, Break was determined, and began sacrificing people to the Abyss.

After killing a total of 116 people, he himself was dragged into the Abyss too, as his contract had finished. There, he met the Intention, who stole his left eye. Before the Intention could take the other though, she was interrupted.

As a result of the warped time in the Abyss, Break woke up in the Rainsworth house 30 years later. He found out that, though the past had been changed, it was different to what he expected. The Sinclair family was not killed then, but just a year later, the same thing occurred. This time though, even the youngest daughter was killed.

Break later joined the organization called Pandora, and formed a legal contract with the Mad Hatter. During that time, he also changed his name to Xerxes Break. In Pandora, contractors are often referred to by their chain’s name, so some people call Break “Mad Hatter,” or just “Hatter.”

ROLEPLAY SAMPLE
Standing behind the pillar, Break listened to Vincent speak. He kept his hand against the wall, eyes closed. He needed to stall them, even if just for a little while.

Suddenly, the ground began to shiver. A vibration rang beneath his feet, and echoed in the pillar behind him. He stepped to evade the oncoming attack; however, it was too late. Something resembling a string wrapped around his left ankle, followed by more of the same kind.

Break thought quickly, not risking using the Mad Hatter’s power so soon, and whipped his sword at the strands below.

He felt the floor shift and distort under him, and his body moved on its own. It felt like falling. Was he being taken somewhere else again? Glen or Vincent must’ve done something. After all, they didn’t seem to have enjoyed his company.

The atmosphere shifted, and soon, new sounds and smells appeared. The air was calmer here, and the wall behind him was replaced with a grassy earth. He moved his hand to stand, drops of water now clinging to his skin.

Yep, the changes have been made now, but there's no option to delete the comment. Does the application need to be approved first before we have that permission? Or are you able to do it?
Sorry about all the trouble!

Is this an enemy stand?