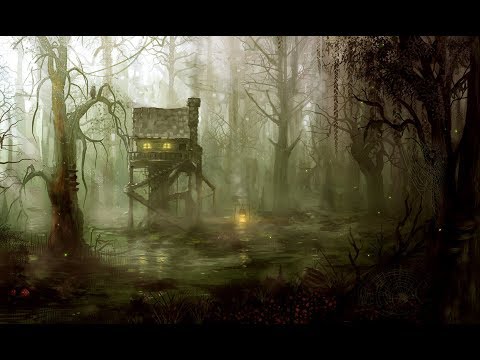 A cryptic and dark swamp located in The Crystal Vales, brimming with dangerous beasts, but animal and humanoid. And a dark, dark secret.

Crestfall Swamp is a large bog along the Eastern Shores of Cascade Bay filled with murky green waterways the swamp is unsuitable for large villages or cities but life always finds a way. Crocodiles, giant toads, overgrown mosquitoes make their layers deep in the swamps thicker treelines where sunlight rarely gets through. Large swamp bats nest in the thick treeline disturbed only by the occasional lantern or torch held by a fisherman in his swamp boat. The waterways of the swamp are filled with Shrimp and crayfish and the few swampfolk that live in the swamps make a living out of catching them and selling them to passing merchant ships along the shores of the swamp at a small floating trade town. The Crayfish are the size of normal crayfish although they're a bright bio-luminescent blue in color. While the Shrimp are much more dangerous, dog sized mantis shrimp called Wallop shrimp by the locals, capable of caving a man's skull with just one hit from their lightning fast pincers. Their meat is still prized although most hunters only risk taking on one at a time, making harvesting them extremely rare.

While most of the Swampfolk are humans or elves living in elevated shacks or in small fishing barges in the dryer areas of the swamp there are far more prevalent and dangerous inhabitants The GatorFolk, humanoid gators with a bandit like society, more akin to a group of thugs looking for the next crew willing to hire them on than a proper tribe. And the Tannaruks, a subspecies of orc tainted with demonic blood, towering at sometimes ten feet high with horns, grey and red skin covered in bonelike protrusions, canine like legs and snouts, and a hatred for all things weaker than them. While they don't have a cohesive system most Gatorfolk and Tannaruks avoid one another or will sometimes team up to destroy mutual threats. But this uneasy peace doesn't come from any wish for cohabitation but because the true ladies who run the swamp demand it.

The Hags of Crestfall Swamp

The Hags have always been in the Swamp, their power courses through it, mages can feel the magic all over the swamp but unlike most magic which is a pleasant neutral force the magic of Crestfall is dark, twisted, tugging at every tree limb. Hanging from the trees are taboos, skulls, rib bones, eyes, ears, all used by the Crones to scare off those that are unwanted and to keep and eye and an ear on the Swamps, nothing goes down without them knowing. The Gatorfolk and The Tannaruks are their tools, the Gatorfolk serve out of fear and for boons and treasure provided by the Hags, but the Tannaruk tribes all work for them out of reverence seeing the three as Gods and worshipping them in burning effigies at night. They capture humans and drag them deep into the swamps where the Hags home resides, a cabin supported on two chicken legs where the three sisters stay, crafting charms and devouring young men for sustenance and stealing young women's youth to extend their own wretched lives.

The oldest of the Hags is The Pretty Sister, her youth seems to never fade even without the constant blood rituals and youth draining her younger sisters indulge in to stay young and beautiful. Or she would be if her body was not a gruesome display, hands caked with a dark brownish red filth of old blood from routing in the guts of animals to scry and search Pandora for more lost souls to lure into her swamps, her straw colored hair is laced with feathers and small bones and curls around itself, and overgrown shaggy mat. Her skin is hauntingly pale beneath it's coating of grime and on full display as the only clothing she wears is a necklace of jaws bones taken from the young men she's lured in with her lovely songs. All to sate her appetite. He role is the leader of the coven, reading entrails and scheming how to further cement their hold over the Swamps

The Second Oldest is the Crow Sister, in her haggish appearance she resembles a crone hunched over with long curved black nails sharp as a ravens talons, her lips are a hard black beak, and beady black orbs rest in her sockets. Her skin is piled with wrinkles and her voice is a wretched squawk. Feathers cling to her head instead of hair and her dress a faded grey tattered sack. She is the cruelest of the Sisters tempting young women of the swamp with love potions supposed to help them find their beloved only to either steal their youth or turn their beloveds into mindless slaves to her will. She also crafts the charms and Taboos the Hags use to control the swamp as well as commanding the giant bat colonies from time to time to cause even more havoc on targets of her wrath or boredom. When revitalized the Crow Sister is young, delicate and beautiful, long tresses of midnight black, her beastial features remain in small doses, a faint ring of black feathers around her eyes, resembling dark circles of makeup, black nails with sharp tips, but in her elegant feathered robes she resembles a woman of nobility instead of a swamp witch.

The Youngest of the three is The Toad Sister, a hag who crawls on all her limbs, using her oversized, webbed hands and feet to carry herself, covered only in torn red rags she stares at the world with bulbous milky yellow eyes. Her mouth is a thin line crossing ear to ear and her skin is a sickly toadish green. The Toad sister handles potions and rituals imbibing the Tannaruks with mystically charged chieftans through monthly rituals mutating their strongest into even more horrid forms. She also grants the Gatorfolk boons such as weapons imbued with toxins and corrosive ichors to help them in their raids against the human settlers. She prepares the bodies of the humans brought back to them for the pot where the Hags cook the bodies to make horrible stews of blood and bone. In her rejuvenated form The Toad Sister resembles a beautiful auburn haired woman, with a slightly yellowish green glitter to her skin, proportional eyes that have an amber glow to them, thin lips, and her red rags form into beautiful strips of red cloth, criss crossing over her body and held by leather fasteners. Using these looks she swims along the banks of the swamps, luring young men blinded by lust to the banks of the waterways where she drags them down into the murk to carve their bones into needles for her rituals.

No one knows the true origins of the Hags, although stories exist of them being the swamps wrath incarnate trying to drive out the elves and humans, others claim they were once humans themselves and made a pact with the devil hiding beneath the swamp to sew darkness into the land to one day free them. But Swampfolk tell a tale of three sisters who fell from the sky one day, who helped the Swampfolk to survive, and extended their lives using potions to stave off times effects. But as time went on the potions worked less and less for the sisters so they would imbibe more and more and at much more potent levels, the oldest was left permanently young but driven by a feral hunger and lust while the younger two were left twisted without their youth and required the youth of others to maintain their beauty, driven insane with despair they would do anything to stave off the horrid effects age had one them. It's unknown what's true, as given Pandora the three sisters may not even truly be related, only a coven brought together through happenstance, or something even worse. All that is known is that they sit as the three Tyrannical queens of the swamp.

wist
updated my organizer with suzaku! i'd love any and all plots with him, so please check it out if you're interested. <3 https://pandorarp.com/threads/sunshine-on-your-face-wists-organizer.54144/post-440237
Yesterday at 11:17 PM •••

Hollytree
Let’s get lost in the cognitive world together! https://pandorarp.com/threads/exploring-the-cognitive-world.58847/post-474326
Yesterday at 10:00 PM •••

Robin
A majority of the essays my students handed in have the distinct smell of ham. Do I want to know, or is this one of those "don't question it" moments? :\
Yesterday at 4:28 PM •••