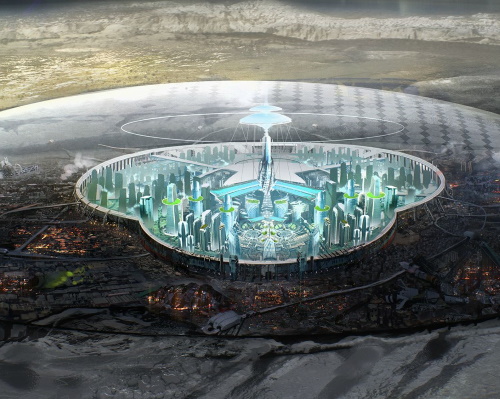 I would like to say that my new position at the Times has been a blessing, but with Elysium nothing is ever a blessing for long.

Before even a month had passed from the election, the Moon-City was rocked by the news that their new General Secretary, Trilla Suduri, had met a tragic end out in the Wastes. Quite what she was doing there is still being established. Nevertheless, this latest twist in Elysium's fortunes has been followed by another; the kidnapping and attempted murder of Chairman Moh Kohn by hardline Sudurists determined to extract some kind of ritual vengeance for the death of their leading political figure.

While Kohn has fortunately survived his experience, the fact remains that both of the Elysian states have now suffered the loss or near-loss of their highest political figures. If there is anything that is more emblematic of the trials and tribulations this city has faced over the years, this would be it. That the brewing conflict most experts were predicting would erupt between the Alliance and the Commune seems to have cooled significantly due to these events is a welcome silver lining on an otherwise enormous thundercloud. Nevertheless, tensions remain high between the two states on the Moon, as many of the key political issues - access to wider Pandoran trade, control over the moon's enormous planet-moving engines and other such hot-button topics - remain unresolved.

In my opinion, a period of peace is to be expected despite all this. Neither Commune nor Alliance seem overly keen on a direct confrontation. The Commune is well aware that it would be the underdog in such a conflict thanks to their lack of military technology, but the prospect of fighting a brutal block-by-block city war where their powerful navy cannot be brought to bear is extremely unlikely to appeal to Alliance tacticians.

Nevertheless, political conflict can still be expected - the tension between Upper and Undercity did not originate with either Suduri or Kohn, and it is unlikely to end simply because one of these infamous rivals no longer exists within the Box. On the one hand, you have the historical disparity in life expectancy, resources and general development between the two "cities," and on the other you now have rival political and economic systems existing within these territories. This is a recipe for instability in the long term, and we will certainly see this play out as time goes on.

In the meantime, I suppose I should be thankful; at least this ongoing conflict is keeping me in work.

Relevant Threads
The Onlyfantom Menace - yes, that's the title Chen came up with. Moh and Maul have been kidnapped, and need to work together to escape!
Reactions: Steel
You must log in or register to reply here.
Share:
Reddit Pinterest Tumblr WhatsApp Email Link

Ophelia
No joke I'd app Bella or Edward in a heartbeat if anyone wanted to app the other one and we could write our own stories in Pandora
Yesterday at 7:29 PM •••

Josef Bugman
It would certainly make business easier if there were some kind of guide or list to Pandora's most renowned taverns. I have so little time for research, myself!
Wednesday at 1:56 PM •••

Iknik Blackstone Varrick
Whoever this "Stark" fellow is, sure has named literally everything in Pandora. That will not do at allllllllllll
Wednesday at 11:45 AM •••