Relationship Status
will flirt with u

JESPER FAHEY
that is not a jesper talent. I shoot things with style. 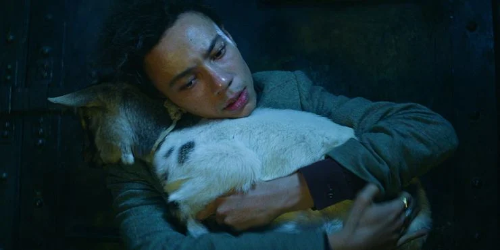 
SKILLS & ABILITIES
SharpshooterJesper is a wiz with guns, very rarely missing a shot. Jesper’s guns of choice is a pair of pistols with pearl handles he keeps on him at all times, but, given a few moments to get his bearings, Jesper’s able to work with any gun he’s given. With his pistols, Jesper’s able to shoot a hole through a quarter-sized coin he flipped in the air, or shoot over his shoulder right through a playing card held in the mouth of another person from a few feet away.

 GrishaThough very much a secret he doesn’t wish anyone to know, Jesper is a grisha - a human with the ability to control matter through the Small Sciences. Specifically, Jesper is a fabrikator, or a durast, meaning he has the ability to work with solid materials such as wood, metal, glass, or stone to change its shape, texture, or composition. Because he’s still untrained, Jesper’s powers are still very weak. His area of strength lies in moving and manipulating metal, and he unconsciously uses his powers when aiming his guns. With concentration and some training, Jesper could learn to guide his bullets to their target, even around corners.

 Other SkillsWith years of gambling experience under his belt, Jesper is a halfway decent actor. While he may not be able to fool someone looking for something out of place, he can do a pretty good job of blending in most places. While he relies most strongly on his guns, Jesper is also capable of holding his own in a fist fight.


WEAKNESSES
Being a Grisha is a core part of who Jesper is, and not using his powers takes its toll on him. While Jesper is reckless and impulsive on his own, the effects of not using his powers amplifies that immensely. It adds on to his restlessness and impulsiveness, leading to him needing to seek out high adrenaline situations or anything that can keep his brain occupied and distracted. Most notably, it has led to a very strong gambling addiction.

Jesper is also not the strongest of fighters, and without his guns, would be easily beaten in a fight with someone who has proper training. He is also still human, and able to fall sick, be injured, or killed.

 MiloMilo is a perfectly ordinary goat with no abilities or skills whatsoever. It is defenseless and easily killable. It is a liability. Jesper loves him very much.

FREEFORM
Oh this was. This was not good. This was very, very not good. Jesper eyes the other players around the table, keeping the easy smile on his face to not betray the thoughts raging through his mind. It would take a miracle to pull this around, and Jesper was not known for miracles. The hands were laid, the cards counted, and... Jesper lost. Of course. The last of his money.

The money that had come from the loan on his father's farm. His father who thought he was here in Ketterdam attending university.

Jesper had royally fucked up this time.

He hated himself for being here, at this table time after time after time. It called to him, though. The adrenaline rush, the high stakes of it all. Gambling was Jesper's siren song and he was powerless to resist, try as he might. And he had tried, at first. He didn't want to be this disappointment to his father. Saints, the idea of his father finding out what kind of man his son had become was simply more than he could handle; it left a sharp pit in his stomach.

No, no, his father could not find out about this. Jesper would figure something out. He'd find some money somewhere - maybe Kaz or Inej could help him out - and he would win it back. He'd pay off that loan, whatever it took.