Tired Old Soldiers
Gonna try to do some posts today. Work slammed me hard yesterday so didn't get as much done as I wanted on here while there. ><
Yesterday at 3:40 PM •••

Jace
hey psst, react to this for a text thread! (also comment if there's anyone in particular you're wantin')
Wednesday at 8:55 PM •••

Severen
ah hate it when they ain't been shaved
Wednesday at 6:40 PM •••

Usually it this time of the year, ground covered in snow, Magiano wouldn't be found dead outside unless for a very good reason. But something had driven him out, forgetting all calm, stashing the violin somewhere hidden and safe and just walk out into the woods, barely protected by his patchwork coat meant for much warmer weather. Wandering, aimless, not completely realizing how far or where, with what goal.
The unlucky fellow falling to his moods was another restless one, but up for less good, trying to sneak up on him, nick his thing. May leave him out here in another way of cold, eternally, if given the chance. Had underestimated how quick on his feet the boy was, evading and taking the upper hand within minutes, eyes gleaming dangerous as, with his usual charm, invited the other to a bet instead. A simple game over each others pouches – tag.
It turned out way different than expected. For the thief at least, now staggering through the snow, having given up on screaming as no one that far out could hear, focusing on getting away – from Magiano throwing knives. The boy had the fun of a lifetime chasing that one around, nimble through the forest, using every advantage he had, laughter echoing around. “Why, don't you want to throw something back? You'll never win this way!” he teased the running one, not recognizing the horror on his face that came from knowing this game long gone to one that'd likely only end in death, with the knives falling closer and closer each time, the musician in his multi-color mantle seemingly never running out of them. Lost in this he wouldn't notice anything around. 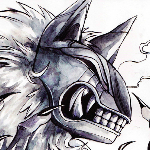 Those signs were what Velouria first picked up on a kilometer or two ago. One trip across the forested regions of Centria were cut short by this new trail she now followed. First she was over the moon to happen upon Magiano's scent again, fresh in the winter air. She could give away that block of amber she found -- one of the best treasures she had ever found in Pandora so far -- as long as she caught up to the boy.

But she was needlessly trailing on her average gait for long enough as the evidence grew more and more worrying. Two people had to be frantically running. Who was chasing who?

Now the wolfskin ran with the speed and power of the beast within, her arms digging into the chilly ground, shoveling snow to launch her strong legs forward in bounding steps. Her silvery fur bristled with the pace she moved, the blood simmering in her veins, throughout her chest. Not careful enough to weave through the foliage in her way, her shoulders glanced off a few thin trunks so hard that they were leaning afterward from the impact. The occasional knife was littered here and there. They had to be his -- she had several of the same design.

The midnight-black eyes widened slightly as the humanoid figures drew nearer. She caught his words and just grew more confused. Why was winning dependent on hitting a moving target -- in the back?

Her jaws, slack from the gulps of air she had to keep downing, opened up to bellow. "Magiano!" she snapped. "What are you doing?! What's this game you're playing!?" It sounded as if she was concerned more with stopping the affair rather than joining it, but was her presence going to change the rules at all?

The loud interruption would've gotten the attention of anyone and the boy stopped in his tracks at having his name called, turning to her with a big grin on his face. “Tag, of course!” A game commonly not played with knives or in the middle of a winter forest. And she might notice that his behavior was even odder than usual, pupils turned to slits, the entirety of his burning focus now turned to her.
He had all but forgotten the chased guy, who unlike him had heard the rustle of a beast approaching and likely saw another threat to his life in it – and who had the sense to turn and run the very first chance he got, to get as far away from the maniac as possible. The musician didn't bother to stop him. Turned out, that dreadful snow was awful good for tracking someone. And really, if the goal had been to kill or seriously hurt him that would long have happened. Velouria knew how skilled he was, that missing would be a rare occurrence.
“Whatcha doing here?” he asked, excited, whipping on his feet full of unused energy – well and to stay warm. His clothes were anything but appropriate, moccasins soaked through, trousers not long enough, the shirt under his mantle all but warm. If not for constantly moving it'd be obvious that he shivered and yet with a feverish vigor he'd lead this chase out where no shelter was.
Reactions: Velouria

Velouria chugged to a halt at the end of the chase, taken aback at first by just how... on-edge Magiano seemed. It was like she had promptly arrested all of his attention, and now that the random man was able to get away, it felt as if she was the target now.

The large creature huffed and puffed for her breath back, cold air stinging all the way down her throat and into the vessels throughout her chest. "...Doesn't sound like... the type of tag I'm used to," she snorted between breaths. Not that she was much for playing to begin with. Now that she could scan over his clothes, it seemed he was dreadfully unprepared to be outside. If she changed back now she'd only have on an extra coat and boots lined with sheepskin, either of which she could offer -- but for now it didn't feel right to get too near to him.

"I was just passing through..." she gestured with an uncurled paw behind her. "And then I wanted to catch up to you." The wolfskin leered at him. "But now that I did... are you sure you're okay? Whatever it was you were doing... it seems awfully suspicious..." She stood hunched over with her feet planted in two packed-down portions of snow, reluctant to budge. Hadn't she parted ways with him at the Ruby Ranch considering him a friend she knew?

Now that he'd stopped chasing the exhaustion of it caught up with him, taking deep breaths with a shudder. The cold though didn't register with him, not really, as he laughed at her comment. „Different worlds!“ Magiano replied, dropping his usual terms of endearment, not giving a real explanation either. As if he could, the whole set-up having come together in a moment, without rules, without escape or reasoning possible.
And now Velouria was the center of attention, though attacking her the way he had before shouldn't even be on his mind, their powers not matched evenly. “What's wrong with a little game?” he asked back in a sing-song-voice, evading the question about his well-being, instead breaking a smile too sharp, too wicked, showing off teeth as if he had a beastly side worth of mentioning. Together with slowly starting to circle her, a knife still in hand, it looked a good bit like whatever occupied his mind had now decided to see if she could be made a target.
Nothing was quite alright, his whole stance tense rather than the usual carefree skirting, too focused on her to actually look where he stepped, stumbling over hidden roots. The world seemed too bright for him now, strain on his eyes catching up and he winced as he rubbed them with the base of one hand. Not understanding what was happening himself, nor really grasping just how bad it was.
Reactions: Velouria
You must log in or register to reply here.
Share:
Reddit Pinterest Tumblr WhatsApp Email Link
Top Bottom