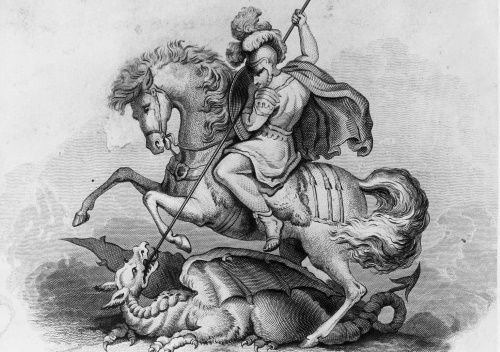 August 9th, of the Year 109​
From the pages of the Cascade Bay Bugler:


Much rejoicing broke out yesterday upon the safe return of an expedition to the Voiceless Heights, a group which had banded together for the purpose of hunting down and slaying the dragon Thaumir which has been causing such terror in our region as of late.

This cruel and greedy beast, declaring himself the King of the Voiceless Heights and demanding tribute as a result, had been attacking the merchant-caravans and travellers who are so vital to the many kingdoms of the Crystal Vales. He had amassed a great store of treasure from these caravans, and had slain many of those who sought to defend themselves. While an armed expedition was certainly in the works, this is now no longer necessary thanks to the actions of a party of hardy warriors.

Banding together, @Josef Bugman, @Shana, @Naofumi Iwatani, @Leonie Pinelli and @Jeralt Eisner proved their mettle and are understood to have slain the devious creature in his own lair, battling against the terrifying might and vicious flames of the dragon in their effort to end his threat once and for all. A government party is expected to recover the dragon's stolen treasure tomorrow, and will inventory it as best they can back to the original owners if they can be identified and if they still live.

A vote of thanks is due to our saviours, and we at the Bugler are sure that they will be adequately compensated for their troubles.

Relevant Threads
In the Hall of the Mountain King - the gang fights a dragon
Reactions: Jeralt Eisner and Claudia
Click to expand...

Shinjiro Hayata
Does anyone know where one can get a high-tech exosuit fixed up? Asking for a friend...
Yesterday at 7:31 PM •••

Sister Mary Eunice
https://pandorarp.com/threads/deliver-us-from-evil.60258/ - have a dream thread with a non-possessed Mary Eunice!
Yesterday at 2:18 PM •••