September 28th, Y111
@Maki Harukawa​
She was initially skeptical over the proposed Watch Livestream of Returning Rockstar Penny Polendina Getting Blasted By Bazooka publicity stunt. She was naturally skeptical over publicity stunts in general, for these were really not the bailiwick of one who had been designed as an engine of war (more preferably, peace). The numbers and figures and charts surrounding the proposal, at least, Penny had an easier time wrapping her head around.

"We would be making HOW much for charity?"

And thus, Penny was swayed by the Pikpok liaison (and their unsolicited yet exceptionally convincing counsel).
And thus, all permits were cleared with the local Alliance authorities (... somehow).
And thus, returning rockstar Penny Polendina stood alone and center on atop a platform elevated many hundreds of floors above Overcity ground level, safely sequestered from a slightly even higher platform of onlookers with their flashing, recording devices.

The titular bazooka sat idle on the edge of the secured stage. "Oh, I am supposed to select someone?" she asked of the smartly dressed liaison, who nodded in exasperation while shaking her own (and most lucrative by far) recording device. "Well... all right. How about..."

A sea of hands rose into the air, a chorus of 'me me me me's rippling through the crowd here and there. Oh... this was going to be a difficult decision, so in lieu of wasting too much time hemming and hawing, Penny's pointing finger gravitated toward the only one in the nearest vicinity who was not jumping around. "...You!"
Reactions: Maki Harukawa 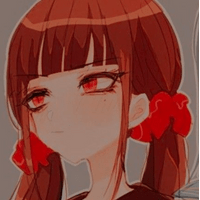 ARMOUR had an unspoken rule when it came to inter-regional relations: do not piss off the space people. It didn't matter what you did, how you did it, where you did it, or when you did it so long as you didn't do it to one class of people: the space people. There was something inherently frightening when it came to the very real threat looming over Pandopolis' collective heads in the most literal of senses in the form of a city on the moon.

She hadn't played many video games or seen much of the internet, but the constant memes of a moon crashing into a very populated fictional city had been famous enough that she'd not been aware of the concept.

Maki Harukawa had been assigned to a struggle on Elysium once before-- a robot possessed by the digital ghost of an anti-establishment domestic terrorist, now turned rock star. Fortunately, the situation had been enough of a success to not warrant much of her own intervention. ... Unfortunately, months had seemed to pass quickly, with the age old Pandoran adage of 'nothing stays dead' coming true more than ever.

The robot was alive, kicking, and rocking out once more-- though, now in apparent deliberate control of her own autonomy (autobotonomy?). Wasn't particularly as difficult as last time thanks to the secession of the Social Commune from the official City of Elysium, but affluent plutocrats never forget when they've been wronged... or, at least, perceive when they've been wronged-- which necessitated her return to the crowd where she'd hoped to remain faceless in observation.

The personal adage of Maki Harukawa also came true: 'fuck what you want, I guess.' She'd been spotted almost immediately by the rocker girl herself, a campaign to... shoot her with (or out of, Maki hadn't been paying much attention) a rocket launcher. For charity. ... Some kind of Woman of Steel gimmick, or something.

She could feel the glare and envious gaze of a thousand eyes at her back, nothing of the situation remotely comforting her as she returned her hands to her side from their indignant crossing and climbed aboard the stage.

"You sure about this?"

Perhaps Penny had seen this girl before, and it was through the tug of deja vu which compelled her choice. But Penny's memory was unfailing, her internal solid-state devices borne from the most cutting edge of Dad's ingenuity -- except when the aforementioned memory had been (briefly) scrambled by her second frenetic visit to the box dimension, and when some of those memories had been inextricably melded with (and subsequently sundered from) Mr. Silverhand's.

... She was sure if she was forgetting anything important, it would return to her via either reminder or defragmentation.

Are you sure about this? Sixty minutes ago ... No, no she was not. At present time? "Ab-so-lutely!" Penny affirmed, both hands raised with fingers extended in the universal symbol of peace... or victory. Curious how these somewhat incongruous concepts shared the same symbol. "I have confirmed that all proceeds are to be remitted for the disadvantaged communities of Ceres and Verdict, and that you would indeed be firing for a good cause!" A pause. "Well, Pikpok is claiming a five percent commission," she hedged for full disclosure.
Reactions: Maki Harukawa

Her public persona seemed to switch drastically, once more. Under the influence of something more potent than a well-placed virus, Penny Polendina seemed to be rude and particularly crass... with some bouts of nicety. But, the ratio of that seemed to switch in recent days. She was forthcoming and friendly, an underlying politeness to her inflection-- hell, she was doing a Pikpok sponsor.

Wasn't the whole thing about being anti-corporate?

It didn't really add up to Maki. Something was going on with her, and something must've happened to whatever was making her act up and do that. "The good cause of blowing you to hell in a handbasket with a rocket launcher?" She inquired, language carelessly spoken for a livestream broadcast. Corporation would probably censor her anyway. The question itself had been rhetorical, but Maki was... flexible, at least.

She just had to make sure that whatever she did here... didn't piss off the space people. "That's a big cut of the pig."

It was a fair wager that Mr. Silverhand would loooove to see Pikpok burned to the ground, and that his approval of this particular escapade would have plummeted off the bottom of the charts. Luckily, Penny did not make every decision contingent to Mr. Silverhand's approval, for that would have been contrary to the ideals of freedom he so passionately inspired.

The stunt seemed like a win-win in which there would be a transfer of funds from the powerful to the not-so-powerful while bypassing violence as a step. Assuming Pikpok had not deceived her. Johnny would never let her live it down if this were a bamboozle, so... fingers were crossed.

(But if this were a bamboozle, she would do her utmost to rectify the situation before he had a chance to not let her live it down. So it was decided.)

"Not to worry!" While the young lady's concerns were understandably understandable, Penny demonstrated her durability by cheerily knocking her fist against the side of her skull. A metallic konk resonated with each strike. "I have been cleared for the force rating of the weapon you hold in your hands. And in the event of misfires, an energy shield has already been erected around the spectator promenade. So, fire when ready!"

Orange curls fluttering in the high altitude breeze, she spread out her arms with a winsome smile, the visage of confidence.

... She was more concerned over whether the promise of a hefty donation was going to be a bamboozle, in the end. Bamboozle. What a delightful word.
Reactions: Maki Harukawa
You must log in or register to reply here.
Share:
Reddit Pinterest Tumblr WhatsApp Email Share Link