Recette Lemongrass
"Aww, but I wanted to leave through the window, like an action hero!" 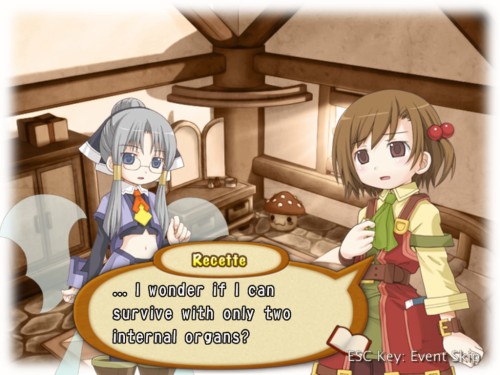 SKILLS & ABILITIES
Physically, Recette isn’t really that impressive. She does have experience carrying heavy things around her shop, so she is somewhat stronger than a normal girl her age.

She does have a lot of practical skills, due to living on her own for three months, such as cooking and cleaning an entire house on her own, as well as determining edible plants versus inedible ones. A particularly notable skill of hers is sewing; she can repair torn dolls in no time with just a needle and a bit of thread.

Intellectually, she might not seem that impressive, but if she can stay focused, then she’s actually a very fast learner. She picked up on how to create and manage an item store with some guidance in less than a month. Also, she has surprisingly detailed knowledge of human physiology, able to diagnose and recommend a treatment for illness. She simply picked this up from being hungry and sick herself, though, so more formal training would be required for her to do anything more than advise people.

The most important skill of Recette’s is, of course, running a shop. She has plenty of experience running and maintaining a store mostly on her own. That means she knows very well how to haggle, appraise items on sight, build and retain customer goodwill, and more. She also had to learn how to keep the books for her store, so she’s very skilled at math by now.

 NPC Companions:In Spring, 109, Recette was surprised by a new friend, a daemon named Odilon. Since Recette is still a kid, Odilon doesn't have a permanent shape yet. He can turn into any non-boss monster from her world, but usually sticks to being a snow rabbit. Since he can turn into all of these monsters, his abilities vary from being armored and able to fight to flying and magically inclined.


WEAKNESSES
Recette is a small child without any combat experience. There’s not much she can do if someone tries to attack her.

As a daemon, Odilon can't get too far away from Recette before they experience intense pain and even death if they get too far away. Any damage done to him is also done to Recette, up to and including death. Depending on his form, he has specific weaknesses, usually being susceptible to being hit from behind, but also being very weak physically or less mobile.

PERSONALITY
Quirky would be one quick and simple way to describe Recette. Anyone who meets her will easily be able to see just how cheerful and somewhat ditzy she can be. Her imagination is pretty wild, and she can often lose herself to her own crazy thoughts if not brought back down to earth on occasion. She’s pretty much an open book, willing to give everyone a helping hand and a cheerful smile, even if they’re a bit strange or intimidating.

Of course, Recette isn’t an idiot. She wouldn’t willingly follow someone down a dark alley with a grin, she just likes to give people a chance to prove themselves. She’s also very patient, willingly letting a bratty girl her age continually try to brag about her better life without bearing her any ill will.

Recette can show a darker side to her personality, it just takes a while. After being abandoned by her own dad, who she felt embarrassed by his very existence, she felt no guilt in leaving him unconscious in a dungeon full of monsters. Not before checking to make sure he wasn’t dead, though.

All in all, most people see Recette at her best, a bright, cheerful, friendly girl who is willing to lend a helping hand when needed. Even people who try to attack her can expect her to give whatever she can to make sure they’re not hurt, even if that means sacrificing something on her part.

Odilon takes after her cheerful, joyful spirit. Whenever there's sweets to eat or troubles to get into, he's often front and center. However, this is somewhat tempered by his dedication to their store, bordering on greed. While Recette takes Recettear seriously, he's more like Tear when it comes to focusing all of their energy on building it up and maintaining it.

APPEARANCE
See above, on the right.

ROLEPLAY SAMPLE
When Recette had told Tear she could sleep for a week after they saved Arma and got all the way through Lapis Ruins, she wasn’t really kidding. It had been exhausting in so many ways that she wasn’t sure how she was going to keep doing inventory.

Also, doing inventory was really boring, so that wasn’t helping her stay on her feet.

She had kind of hoped when she brought it up with Tear that morning, she'd maybe agree to close the store for the day, just to get a chance to recharge. It seemed like a good argument to her when she'd whined, "Teeeeear, I can't just go from saving the world from your old boss to running the store."

"You can, and will, Recette," Tear's no nonsense tone brooking no argument, "you've been focusing on getting through Lapis Ruins over running Recettear. We've been hoarding some valuable stock that needs to be sold."

"But people are going to buy these things tomorrow, won't they?" Recette asked, "what's one more day going to do to the store?"

"Yes, one more day. And then tomorrow, you'll argue it's just another day. Then another, and another. Our bottom line isn't going to survive your attempts at getting out of work. If you can't even run the front yet, why don't you make sure our inventory is correct. We have collected a lot from the ruins."

Squawking, Recette waved her arms and shook her head. "But Tear, I'm so tiiiiired! If I try to do inventory, I'll just fall asleep!" Of course, that wasn't the most compelling argument, and Tear only had to stare at Recette over the top of her glasses to get her to go back to work.

Still, Recette wasn't lying when she said she would fall asleep if she had to keep doing work. She could feel her eyelids growing heavy as she started opening the next box. The only thing that kept her focused was feeling something tugging on her ankles.

...there was something tugging on her ankles.

With a screech, Recette tried to jump away from whatever it was, but she only felt the thing get even tighter around her foot, and then it was joined by a bunch of others grabbing not just her, but also the box she was trying to cling to. It gave her a good view of the things at least. She could see they were some kind of vines, but that didn't mean much when she only had a few seconds before disappearing completely.

Location
In the Oven

Occupation
Not a Piemaker, oddly 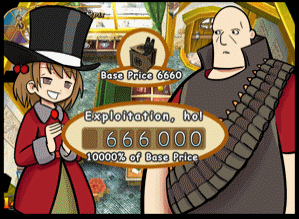 SHODAN
//come and get your horror plot, pals!

Amity
Hello everyone! I hope you are all safe! I just wanted to apologise for those who were waiting for me to post. I am allergic to pollen, and since its the summer, I have been sneezing like there is no tomorrow, so I couldn't focus. Not to mention my home is full of flies who keep appearing out of no where! I will post when I can!
Yesterday at 2:45 AM •••

Meeks
not an official absence but i am waiting for the results of a covid test so, hopefully i will feel well enough to start posting again later this week! sorry to anyone waiting on me <3
Yesterday at 1:17 AM •••

Steve Rogers
Finally glad to have a birthday that doesn’t involve running around the city in bulletproof spandex. #OldManPerks
Saturday at 9:15 PM •••