The Man Without Fear

Sept 19th​
In the days before the 'Interpandoran Conference of 109', General Secretary Jordan has been to release countless political prisoners, many of which were sent to re-education camps located deep within Alliance space by the last regime. This comes in as he's pushed forth countless new regulations and laws, such as granting the people many new rights and freedoms such as the freedom of opinion and expression, the right to peacefully assemble and freedom of association. All of which he states were commonplace back on his homeworld.

He's also put passed a law which would create an Investigative Joint Task Force between the Lantern militia and Alliance, that will look into the various Councillors of the Alliance and their directorates. It's set to watch over not only the councilors but ensure that everything they do is under the microscope, given Jordan has not yet fired or replaced many of the councilors who've been in power since Skywalkers regime.

Jordan has stated that he hopes to not only root out those who are doing wrong, but also members of the Council who either waste resources, spend funds on themselves or seek to work against his agenda to improve all planets and entities apart of the Alliance. It's expected to not only send a warning to the Council that Jordan is watching everything they do but also to the people of the Alliance that their calls for change have not gone unheard.

And that is why General Secretary Jordan in a shocking turn of events has de-classified countless files on re-education and forced labor camps, many of which were filled with political prisoners who the last two regimes sought to make 'disappear'. All of which are being shut down and it's residents are being returned to their homes, with compensation and potential employment by either the Green Lantern militia or within a sector of the Alliance's workforce.

But as many changes have come from Jordan, reports have come in that army and naval elements have been spotted in what was once considered 'frontier space', however sources within the Alliance tells us that Jordan has decided to integrate countless additional planets and space sectors, expanding the Alliances border and might. 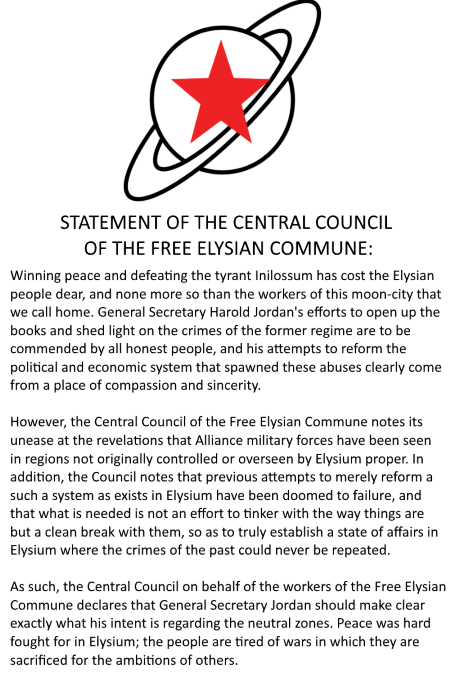 Jason Todd Tanaquil Jason Todd wrote on Tanaquil's profile.
Happy Valentines day, lets make more than today special as every day should be special with you.
Friday at 8:57 PM •••