This roleplay has reached its conclusion.

They all practically got into heckling the mastermind; Chuuya was hoping that this was gonna do something and cause something to happen. He wasn’t sure exactly what would happen—would Monokuma pop up and be a dick or would the mastermind get pissed off enough to face them?

And yet, the bear just went on a monologue. Chuuya ended up leaning against a rail and just sighed loudly, rolling his eyes. It was slightly interesting to hear what Monokuma had to say. Obviously, she wanted to rattle them, and calling them pawns was...interesting. More advance pieces? Did she have people doing her bullshit on the outside? Made sense since she did a mass kidnapping and tossed them who knows where hooking them in virtual reality bullshit.

The whole ‘this is my world, I choose when you die’ was getting old and really, it was boring. “God, will you just shut up? You got the villain monologues down to a T.” Like, really, he expected more from someone who did an elaborate plan like this.

Sure, Monokuma said Naoto did the deed and that had been a hunch he had, but then Hoshi pulled out something from his jacket; it was Naoto’s handbook, he was injured and he pulled out a gun...so it was Hoshi. His first hunch was that Naoto had done it; if it was murder, then either Yuri or Hoshi. He became suspicious of Yuri due to leaving so quickly, but Hoshi had been the one there. None of them knew why he did it, but it could have very well been a plan Naoto had come with and got Hoshi roped into it.

He had guts—a feeling of respect came to Chuuya as he looked at Hoshi. Dazai said that they weren’t going to vote for him and the redhead nodded at that. “Voting would also make this asshole happy, so no can do Hoshi. We’re in for the long run.” He said, as he gestured to Monokuma.

Dazai spoke up; stated what was the point in all this. He concluded that all this was probably to fuck with reality in some way. And it probably was—didn’t he say something about that hacker, Futaba? That she didn’t have a home or something? Honestly, the mastermind was despicable.

“So, what? This whole game was to fuck up Pandora’s population? Get them all sad and depressed? That’s fucking stupid.” Dazai threw a question at Monokuma, asking what he wanted.

“What you’re doing is fucking pointless. Because in the end, Pandora will move on without you. There are magic, technology, and every kind of bullshit that this ‘killing game’ is barely gonna make a dent. Nobody is going to care how ‘despairing’ it is; they’ll probably laugh at how cheesy of a show this was.”

Chuuya stood up straight and crossed his arms, “Anything you do, will mean nothing. Whatever message you want to spread means jackshit. Pandora has gotten through worse: the people will barely bat an eye as shit gets fixed, hope gets restored, the end. You? Are a speck of dust in the wind.”

There it was. So the bear did show itself again. Hecking would have gotten boring eventually as well. Everything about this experience was now becoming an exercise in how much mental exhaustion and sheer boredom any of them would face. Before everything else that would inevitably happen, happened. But let the bear rage let the bear say what it wanted to say and then they could listen. The bear had a habit of sharing more then it probably should when it got in a monologuing mood.

The bear was assuming leaps and bounds there. For starters if it said that Naoto had killed herself then Dorothea sincerely doubted as much. A suspicion that got more ground as Ryoma denied the bear that much seconds later. So the guy was hiding an injury, a weapon and the guilty of having killed Naoto. Dorothea hadn't dismissed him as a potential murderer. But out of all of them Ryoma had been the one to come the closest to be able to walk out and walk away. And she found herself slightly surprised by that realisation but it was not one to dwell on.

They had to focus on the situation as it was. So the mastermind didn't just want them to fall to despair but the people watching. Their friendly hacker might still be out there, and if she and Dazai were friends, they were entertainment and a reason for others to fall into despair. As if anyone out there would still care for her now that she had revealed what she had. Assuming the bear had not gone ahead and revealed so much more already. ¨If we´re entertainment then you´ve outplayed your options. We know it's not real so why should we continue to play your game. Anyone who's watching knows it´s not real and someone already got in once¨ and the bear had gone after her. But if one person could do it, then the system was not airtight.

¨There are no real stakes in this game anymore. Not that there really were stakes before, people disappear all the time.¨ from the current group, sure they would leave people behind. Everyone had ties to other people. But would they be missed? Pandora would move on without them. Chuuya was right, the mastermind was just a speck of dust, but so where they. Dorothea knew that she certainly wouldn't be missed, not if she died here and together with the people around her.

¨The game is up, you´ve played your hand and we refuse to play any further. You can kill us quickly or you can kill us slowly. But even that won´t be real, and without it being real no one will care¨ and pain wasn't a stranger to any of them. 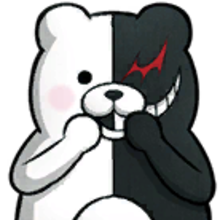 Monokuma paused, and seemed to sigh. "Well then," he said, voice void of any mirth. "Enjoy your despair-filled deaths!"

With those final words, the bear vanished. The light from the voting panels went next, and the eHandbooks shut down, becoming nothing more than empty panels of metal. The weapons vanished, guns and even particularly sharp pieces of metal or wood seeming to turn to dust in your hands. The elevator wouldn't come, but the lights were too bright to sleep, for the first few...days?

You talked with the others who were trapped, until your mouth and throat became too dry, too hoarse, and every breath, every sound, was painful, until it felt like your insides were coated with sandpaper. Without food, without water, without sleep, you became too weak to move, to hurt, to harm, to heal. Movement was sluggish, when you had any. The hunger inside you was overwhelming, painful in its emptiness.

You managed to sleep, but it was more from the bone-weary exhaustion that seemed to permeate your very being than any actual ability to sleep, and every time you fell asleep, it became harder and harder to wake up. Thinking was hard, through a fog of thirst and hunger and despair. In the end, you just stopped thinking.

In the end, you just stopped waking up.

For you, for the people trapped inside that courtroom, this happened in weeks, maybe months. There was no real way to keep track of time, but your bodies felt like months had passed.

For the people watching, it was an hour. It seemed to happen like a montage, a timelapse, as the people trapped within the courtroom starved and thirsted and died.​

"Here's the thing," the AI Junko explained, standing next to the screen, hair tied back, glasses on her face, like a professor, lecturing her captive audience. "Time, as we now it, is pretty much a human invention. It's a way to measure the movement of stuff, like the sun in the sky, or birds flying, or how quickly people can fall into despair if you give them enough rope to hang themselves with. In a sealed place like this, time is malleable. There's no movement to measure, all there is is the internal and external stimuli. So, if you alter the stimuli, you can control someone's perception of time, and ta-da! Five people starving to death without having to wait months for the despair-filled payoff."

"Oh, don't give me that look, Makoto!" Her eyes became wide, her face a little pouty. "Can't you just accept that I won? They chose despair! Chose to die in despair, place their faith in me. Me, of all people. In the end, despair wins over hope. It's not how I planned for this to end, but it's an ending all the same. A despair-filled ending, my favourite type~~"

"I won, and you lost, and now? You'll have to live with that. And live with the knowledge that I'm out here, and you don't know what I'm going to do next. But....I guess it's time to give them what they so desperately want."


You wake up in a warehouse. It's dark, and smells of damp. You're alive, all of you, everyone who was in the simulation with you (mostly, you couldn't see Tsumugi anyway). Waking up, bit by bit. Your body is covered in scars and wounds you don't remember recieving, but you're alive. In your pocket, is an envelope. You open it, and it's...a liability waiver? Signed, with your signature, saying that you knew and agreed to what the Pandora Killing Game entailed, that you agreed to having your memory erased. It's a contract, but you don't think you ever signed it.

"Well, that was disappointing," Junko said, watching as the livestream clicked off. The last person had keeled over, and so it ended. "Where's the climax? The fight? How boring."

"I know, right? You've got to do better than that."

"Look, I said keeping the dead ones alive was a mistake. I get that you wanted them to watch, but--"

"Hey, I blame the hacker. Getting rid of her was your problem."

"It wasn't my lack of cybersecurity that let her in."

Junko looked to the side, where a small pile of bracelets glowed with a red light.

OOC Notes: And with that folks, it's over! Thank you all for taking part in this plot, and it's been a pleasure writing with you all. Here is a link to a feedback form (I don't care if the feedback is good or bad, I'd just request that it's constructive), and, once again, thank you for your participation!

Shinjiro Hayata
Does anyone know where one can get a high-tech exosuit fixed up? Asking for a friend...
Saturday at 7:31 PM •••

Sister Mary Eunice
https://pandorarp.com/threads/deliver-us-from-evil.60258/ - have a dream thread with a non-possessed Mary Eunice!
Saturday at 2:18 PM •••