Race
some sort of elf

You and your partner have woken up handcuffed together in a dimly lit space vaguely resembling a hotel room, with a bed and basic furnishings present, yet the door is shut and the only light seems a flickering lamp, and you are stuck on the floor. Neither one of you remembers what exactly happened the day/night before, or how you got where you are now. Do you know each other? Maybe, maybe not. But it doesn't matter now. All that matters is figuring out how to work together to get free of this situation, and continuing on with your lives. ​
Magic Hat Guidelines
Reactions: William Hudson and Clara Oswin Oswald

A dimly lit room came into view as Clara cracked open an eye, her head swimming as she struggled to focus. She brought a hand up to forehead as she tried to stop everything in front of her moving.

Wait...a room? What the hell had happened for her to get here?

She then felt something against her back, and saw it was the edge of a bed, and she was sitting in front of it on the floor. Groaning as her muscles creaked from disuse, she attempted to move her other arm but realized immediately that it was weighted down. She looked down, and it was like someone had thrown a bucket of cold water over her as she saw the handcuff.


“What-” Clara choked out as she uselessly rattled her wrist. It was then she realized that she wasn’t handcuffed to something, but someone. Taking a deep breath, the woman dared herself to look up and felt as though she’d been winded as she saw their face.

There were one of two possibilities of who that face could belong to, and Clara really, really did not want it to be the one from the restaurant. But, in her confused and dazed state, coupled with the darkness of the room, her mind leapt to the worst-case scenario, and she started looking around for something she could use to defend herself with.

The lamp was too high up, but she could reach the drawer. Quietly opening it, Clara felt around and her fingers grasped something. It was a...

“A bible? Great,” she almost rolled her eyes. It was better than nothing and even if she couldn’t beat to him death with it, maybe it would be enough to deter him. Vampires hated religious stuff, right?

She kept her gaze on the man next to her, ready to strike if he woke up and tried something.

Now she needed to find a key, or something sharp enough to cut through these things.
Reactions: William Hudson 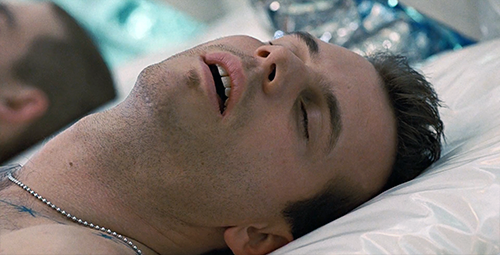 Hudson jerked awake with a couple coughs, his throat dry from having his mouth open fuck knows how long. He winced and rubbed his head. Oh, man. It was killing him! How much had he drunk last night, man? Had he flirted with the wrong dude’s gal?

Gritting his teeth, he squinted blearily around the dingy room, taking in the bed, the flickering lamp, the tables and closets and shit. Huh, ho, man. This was a hotel room. Maybe he’d flirted with the right dude’s gal? Then again, he couldn’t remember a fuckin’ thing about last night. Plus he was still wearing his pants. It couldn’t have been that great, man.

He started to rise to his feet, but somethin’ tugged at his wrist. What the hell, man?

Still slow and thick headed from sleep, he stared blankly at the strap of his tank top, following his bare arm down to his hand. Metal gleamed in the lamp light. Was that a bracelet, man? No, man. A chain was attached to one end. Solid, sturdy, badass loops. The type you couldn’t break.

Brain firing sluggishly, he followed the chain to a woman. Hudson couldn’t make out her features ‘cos of the way the lamp was fuckin’ glaring in his eyes, but she had a hot outline, man.

He straightened up and broke out into a big gappy grin, pretty much most of the sleep fog lifting from his mind. His head still ached like a fuckin’ bitch, but he dismissed it as background.

“Hey, baby,” he put on the ol’ Billy Hudson charm. “You wanna cuff me to the bed next?”

He clenched hold of the chain, letting out a triumphant “c’mon, baby!”, before attempting to yank her on top of him. His pants already felt a little too tight. Hey, man. Don’t look at him that way, man. Don’t fuckin’ judge him. It’d been too fuckin’ long since he’d got any pussy. The women on this rock always looked like men or were already taken or uptight and frigid as fuck.
Reactions: Clara Oswin Oswald

Okay, he was waking up. Time to see just who this really was.

She still couldn’t see him properly, her grip tightening around the book. She expected him to maybe say something, but what came out of his mouth, followed by what he did next surprised even her.

Her nose wrinkled at his poor attempt at flirting, but before she could so much as roll her eyes and think of a comeback, she was pulled forward wrist first, his voice ringing in her ear.

“Hey, get off me!” She shouted, not really caring if anyone heard. What kind of place left two people to be chained up anyhow? Especially if one of them was either an insane marine or a bloodthirsty monster?

He managed to get her on top of him, but it only earned him a blow to the side of his face as she brought the book down, spine first. That is, if her aim was right in this bloody darkness.

The voice sounded kinda familiar to him, man, but he didn’t pay it much mind. He was interested in only one thing right then. C’mon, baby! Gimme some lovin’!

But what she gave him was a book to the head, the sharp edge of the, like, narrow part catching him in the eye and across the cheekbone. Icy light burst in his vision on that side as though somebody had lit a firecracker in his skull, man. Fierce fuckin’ pain blazed through his face.

He screamed and fell back against the bed, cupping hold of his eye socket. “Jesus Christ!”

His voice dropped to a quiet moan, sometimes rising shrilly or threatening to crack as he whinged at the crazy bitch: “What the fuck’s your problem!? What’s your problem!? Oh, man. Oh, maaan. I can’t see anythin’ out my fuckin’ eye now!” Nor would anybody else with their hand covering half their face… “What if you’ve blinded it!? I need that eye!”

Seriously, man. What the fuck was her problem!? She was the one who’d cuffed ‘em!
Reactions: Clara Oswin Oswald

Clara took the chance to scramble off him as he screamed in pain.

"My problem? You were the one that couldn't keep your hands to yourself. Touch me like that again mate and I'll do worse."

She rolled her eyes, more confident now that this wasn't the vampire. Otherwise, he would've torn her apart in seconds. "I barely hit you, stop bein' such bloody baby." She sighed, trying to see him through the dark. "It's you ain't it? Hudson."
Reactions: William Hudson

“No, miss. It’s the Easter bunny,” he answered her question, his voice dripping with sarcasm.

He kept his hand pressed to his sore eye, squinting at her in the dark. With a stiffening of his spine, Hudson realized that he was cuffed to that rat fuck Company Rep’s sexdroid. His sexdroid, man. Least he guessed she was an android. Who the fuck else would date that greaseball bastard?

“Hey, you’re dog meat’s gal,” he said, tugging experimentally on his shackled wrist. No slack, man. “What’s with the cuffs? Is your sex life that bad you gotta invite more people along on the ride?”

He could believe that all right. She’d probably get more pleasure outta a frozen corpse than the Company Rep. More emotion, too. That guy was sure some kinda oily, cold blooded reptile shithead.
Reactions: Clara Oswin Oswald

Of all the people to end up with, it had to be him. She glared in the dark at his smart-arse reply.

Her mouth dropped open as he also recognised her. “Yeah, 'cause I’d really want to be shacked up with you!” She snapped, exasperated. “I woke up like this.” Clara held up her cuffed wrist as best she could.

“Can we just focus on getting out of here, and nothin’ else?”
Reactions: William Hudson

Hudson flashed her a shit-eating grin, all wide eyes and gappy teeth. “You think lover boy’s gonna buy that bullshit excuse, miss?” He feigned an unconvincing falsetto, batting his eyelashes: “I didn’t sleep with him, Burkiepoo. I just woke up handcuffed to him in a hotel.”

Hudson dropped the sarcasm, his face thoughtful. “So how much did you drink last night?”
Reactions: Clara Oswin Oswald

If looks could kill, Hudson would be a pile of ash right now. “Seriously? That’s your impression of me?” She irritably asked. “And why would I bring someone 'ere of all places and handcuff them with no memory of it? Do I look that desperate?” She paused, before quickly adding, “Don’t answer that.”

She was feeling around the floor, but she couldn’t go far thanks to this idiot who had all the wit to make a stuffed bird laugh. “Nothin’! And how do you know this wasn’t your idea if you can't seem to remember? Maybe you wanted revenge on Carter that much you kidnapped me?” It was grasping at straws, but Clara was feeling petty.
Reactions: William Hudson
You must log in or register to reply here.
Share:
Reddit Pinterest Tumblr WhatsApp Email Link

Keira
I'm having a lot of trouble drumming up any motivation or interest in posting atm but if anyone wants to work on winter threads this weekend to close them up, I will do my best. Just toss me a PM or reply here!
Yesterday at 7:10 PM •••

Afro-Circus
I forgot how much I loved Tangled. Now I want to app them both! fshkgd <333

Octi
I'm atrociously slow right now and I can't express how sorry I am for that. The muse is coming back! Still, with the season change coming up, if anybody would rather let things go and try again next season, let me know!
Yesterday at 8:53 AM •••