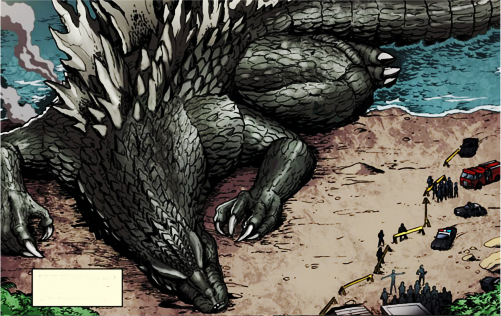 JUNE 5, Y109​
For what marks the third time in recent years, a familiar, extra-large lizard has come ashore in Pandora - though this time, it appears that Pandopolis City is the primary target of its foray towards civilization, as reports of the creature's presence in the Bay of Pithos have surfaced since the start of the month. It is unclear why the creature, which formerly lingered in and around Cascade Bay, has chosen to make the journey to new waters, but citizens of Pandora's capital are exercising caution in the face of potential danger. As of the writing of this article, the creature has not shown any indication of aggressive behavior, nor has it attempted to enter the city itself. It appears to be stationary in the bay, though residents of Pandopolis City have reported noise complaints regarding the creature's vocalizations, which seem to follow little to no pattern that is discernible even to wildlife experts who have been contacted regarding the unusual situation.​
Experts advise giving the creature ample space at all times, and to contact the PDF with any concerns for public safety.​