MORDRED
You gave me no choice. Special Abilities
Sorcery
Even as a young boy, Mordred has a rather strong affinity to magic itself. He can cast several non-verbal spells that could stun or move objects by his own volition. Although worth noting, that he wields little control of his magical gift, where if his emotions are at its peak or if he was in a state of immense distress, he would occasionally lose control of his ability which often led to a destructive impact to several objects around him per se glass shattering or door hinges breaking apart.

Despite not being subpar to the sorcerer of legend, Emrys, Mordred is one of the few sorcerers who could use magic in a way that does not require a prior incantation. He seemed to favor spells that induce kinetic forces and seems to be rarely seen to use elemental-based ones. As he grew, his powers grew with him. And he's learned well on how to master or control his power with the primary objective of concealing his identity from the danger of being discovered as a sorcerer in his world. Where particularly, Mordred has gained quite of control of his power to that he could prevent several unwanted effects arising as he cast a spell.

Telepathy
Mordred has been known to be able to converse or 'call-out' to someone else who also possesses an affinity in magic telepathically. This can only be achieved if the other particular subject is within a relatively short distance from him. He discovered this ability as a young boy and has been using it at nearly all times ever since. Although, nowadays, the use of his telepathic power is not as often performed as he once did in the past.

 Skill
Swordsmanship
His time with both the renegades that roam Albion and the rigorous training he had as a Knight of Camelot made him as a rather combat-effective individual who can easily gain an upper hand if the enemy falters. He's a quick learner in the arts of direct combat, sword fighting, and knew well how to handle several medieval weapons efficiently. His swift agility and ability to adapt quickly to the battleground he's upon made him a formidable foe to those who swung their swords on him.

 Equipment
The Sword
He carries with him a sword forged in a dragon's breath, a weapon known to be able to take the life of any living beings.


WEAKNESSES
A strong, steady control of his magic remains as what Mordred dominantly lacks in regards to his own gift. He may have proven himself as a prodigy with a strong tie to magic itself, but he still struggles occasionally on controlling the accidental side effects that may arise the moment he uses his magic. Strong emotions also contributed to being able to trigger accidental outbursts of his magic that resulted in influencing objects that are directly near him, which the aforementioned effects include but not limited to, shattering or completely destroying these objects.

Despite him being a formidable fighter, mortal wounds and injuries can still prove to harm him. His magic does not shield him from death nor fatal injuries. He still requires swift and intensive medical treatment if he were to receive such. Also worth noting that those who possess a higher degree of knowledge on combat may come to best him, considering that the former knight hasn't entirely succeeded in his training to become a full knight of Camelot.

PERSONALITY
At first glance, Mordred displayed the demeanor of a benevolent, compassionate, and polite individual. Always willing to lend a hand to those who ask for his assistance, or an ear for those who wished to relieve their despair. He never asks for anything in return, all genuinely intended as an act of goodwill. His empathy lies the most to those who also wield magic, to the extent that he considered them as being a part of his people. Aid, if asked, shall be given rather indiscriminately to those struggling to conceal or control the very ability which he considered as a blessing. However, he could be shown to have an impulsive streak. Risking his life for the safety of others that he cared for is a common paradigm rested upon his mind.

Despite of this seemingly kind exterior, there is an inner conflict that dwells inside. After learning of what he perceived as treachery from his closest friends and comrades, this streak of impulsivity embarked on a new tide. Encouraging him to use any means necessary to fulfill of what he seeks the most, cold-blooded vengeance against those who wronged him. And in addition, less remorse for the actions that he took. Believing that the principles and all nonsenses talk of honor that he once complied and held faith in to be meaningless. And thus, he adopted the new ones that he considered more befitting on his current aims.

It's fair to say as well that Mordred is progressively descending to a state of a much sinister personality. The conflict still remained there as he has not yet to bring Arthur Pendragon his bane. A death Mordred deemed necessary to deliver his judgment for the king's actions. Which it must be reiterated at this part that this judgment is based on brash impulsivity as he watched his lover executed under the king's order.

The sheer tremendous force sends him to the outside. Mordred should've known better. He has been playing with fire ever since he cast the first glance upon Merlin. A dangerous game with a sorcerer he knew he should have never launched the first attack on, for fear of the devastating retaliation blows. He's well-aware of what Merlin is capable to do, and yet he took no heed of these cautions that stays in his mind. He wanted to prove that he can tame the fire, play with it even longer, and eventually, vanquished it in a way it never thought of before. But he can always wait longer, provoke it even more to the point that it devours itself. A foe is best to be bested when they possessed little control of their own nature when they let their emotions to direct their course of actions when the sane mind is no longer present. Precisely how men top nature, by using wits and culturized, advanced violence. An act of pure aggression will only bring him a short triumph. A lesson he learned well as he tasted the power that surpassed any sorcerer alive himself. That he needed to change the way he plays.

It was now his turn to feel the pain that sends him grimacing. The hard ground proved to be a rather highly uncomfortable surface to land onto. It's not that he isn't used to pain, but the blow is something that he took as a surprise. As his plan of escape effectively failed as he saw Merlin emerging from the rubble. He gritted his teeth, shooting him a cold glare. "Have you consider not doing what they told of you?" He asked, fighting hard not to raise his voice. Afraid that anger may reveal his true emotions once more. "Take a good look at the damage which you've caused. Emrys, you've present nothing but pain and misery as you passed by. It is in your liberty to blame anyone," Merlin has spoken of the dragon, of the people that may play a part in this twisted ideation of how the future shall be. Those who pushed him to a certain path, however, to Mordred, he was not without a choice.

"but the fault will always be yours."

And seeing how both of them faced each other upon this moment, Mordred assumed it was Merlin's own resolve to chose the former.

He pushed his palms against the dirt. The aching sensation remained as he hoisted himself up. Mordred would not let Merlin glancing down at such a defeated stance. He would not let him once again derived pleasure from seeing him in agony. There was a struggle as he set to stand by his feet, but he managed to keep himself from falling. Anger being a supporting cane that supports his will to appear eager enough. A display of menacing confidence to show that Merlin's powers do not frighten him. "I supposed that settles it."

The tears were genuine, there was a regret there that Mordred can bear witness to. Nevertheless, his conscience is nowhere to be found as he looked back in mere disgust. Past the point of considering forgiveness to be given to his former dearest friend. "If you love Arthur this much, how far will you go to protect him? Will you take his place for my blade to strike? Will you replace its drought for the blood that you alone have brought? Will you admit all of your wrongdoings, all of your judgments that led me to pursue the path from which I cannot back away from?" He threw Merlin a sly smirk before he continued. "All of your sins, all of those foreseen concerns of yours that brought us woe even before they are meant to be concerns."

He inched closer to Merlin. As if daring him to use his magic once more upon Mordred. "You may not be able to die just yet. But Arthur can see you of who you really are. A monster under the guise of a friend." His voice came almost whisper-like. A subtle threat beneath the smirk lies still. But he must admit, that it would be a grand bliss to see how Arthur shall respond to this revelation. That his most loyal friend is too blinded by his so-called, wretched destiny that he's willing enough to toss Mordred away to the pit beyond salvation, where a reprisal becomes his only and closest ally.

"Can you do that before Arthur himself and I? If so, then I shall spare him."

A true knight holds true to his word, but Mordred is no longer a knight.​
Last edited: Wednesday at 3:03 PM
Reactions: Merlin Ambrosius

Bump! And this dramatic angsty boy is done!! 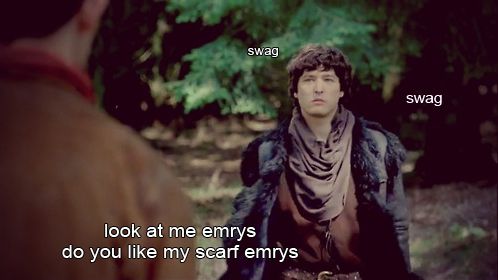 Shinjiro Hayata
Does anyone know where one can get a high-tech exosuit fixed up? Asking for a friend...
Saturday at 7:31 PM •••

Sister Mary Eunice
https://pandorarp.com/threads/deliver-us-from-evil.60258/ - have a dream thread with a non-possessed Mary Eunice!
Saturday at 2:18 PM •••