Description
sure, it's only been a week or two, but zenitsu can't be the ONLY muse of mine here, right...?

 WIRT - OVER THE GARDEN WALL

an anxious high schooler, artistic and sensitive, surprisingly fluid for their rigid matters. they enjoy poetry, music, train sets and tea - though they try to please everyone else before standing up for themselves. they want to be wanted, but to do that, you have to put yourself out there... how anxiety-inducing!!!​
FERN THE HUMAN - ADVENTURE TIME

sometimes a brother can be a paradoxical time clone fused with the cursed matter of a plant sword. fern has a hero heart like his human counterpart, finn, and wants desperately to do what's right. but the way can be violent or morbid in his case. mistakes often overwhelm him, especially in comparison to finn the human.​
LUZ NOCEDA - THE OWL HOUSE

a typical 'weird girl' in every sense of the word. she loves magic, witches, and editing together videos of anime clips - in the boiling isles, she learns how to be a real witch under eda clawthorne's guidance. mischievous, goodhearted, and impulsive to a fault - a bright light to all she meets.​
THE GOLDEN GUARD - THE OWL HOUSE

an enigmatic figure under the tutelage of emperor belos, an authority that has the boiling isles wrapped around his little finger. the golden guard enacts emperor belos's rule, but in pandora, his lighthearted, smug attitude may not be so sure. the need to do right is still there, deep inside...​
HYPNOS, SLEEP INCARNATE - HADES 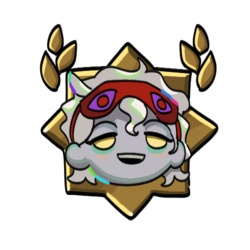 receptionist of the dead in the house of hades. he's scatterbrained, oblivious, likes his women dominant, and gives out the beeeest advice. best advice being sarcastic, of course. as for how genuine he is at any given moment? it's a toss-up. next time just uh, don't die, zag!​
MAKOTO YUKI - PERSONA 3

(GENDERFLUID HEADCANON. YEAH IT DOESN'T MAKE SENSE IT'S FINE) the protagonist of persona 3. after hopping from home to home for years, they've resigned themselves to no lasting friendship - yet in iwatodai, things would change, and they would make the ultimate sacrifice for all of humanity. which begs the question: why are they here?

shou is a powerful esper, or psychic. responsible for his young age, and despite the actions of the adults in his life - he doesn't overstay any welcome, given or not. he tends to plan things out, but it's hard for him to keep his cool when things don't go his way. and if he has a problem with you, you will know.​

SO, WHO SHOULD GO TO PANDORA NEXT...?

Hannah
Post hoarding this weekend as I’m not feeling too hot!
Today at 4:39 PM •••

Nic
My organizer is finally up, feel free to swing by! https://pandorarp.com/threads/everything-is-better-with-a-unicorn-nics-organizer.62635/
Today at 10:24 AM •••