I wonder sometimes, how interconnected two worlds, two lives can be. In this world more than ever, I cannot feel my love for Mirena dwindle, no matter how apart we are. Why think separate of this life and the next? becomes Why think separate of this world and the next? It becomes a reminder, a beacon of hope that one day, she will be here and with me, too. As I have waited for her for centuries passed and have been rewarded with her return, I feel optimism at the thought that she will be brought here as well. The time is on my side, after all.

Yet the question needs to be asked, of course, whether or not she remembers at all. People have talked about how some end up in this world, catapulted here from a different point in time than the ones they are supposed to know, to love, even. For I know I will be strong enough to accept her at any point in life, but will she too? This world is a frightening one, I can imagine, for a woman as strong as her and yet so inexperienced with modern things. Will she know our son? Will she know our wedding vows? Will she know of the monster I became to protect her and our legacy?

All I know, is that she will be beautiful and of strong heart, smart and so compassionate; as she has ruled over our country beside me. In any life and in any time. Even in modern days, even when memory is not of the essence any longer because there is no memory to be recalled of a past this version of her will only have read about in history books at best.

I worry, too. Whether the truth of the past we shared has turned into a glowing fragment of pure love, entirely omitting the ugly parts, the parts none of us were proud of. Whether that will become our downfall. Or mine.

For a love like this may be bright enough to illuminate the darkness and shadows, but because it is that way, it ought to show the dark patches too, the ones we would love to hide, if not from the other then from ourselves. And though I am ready to see her again, I cannot help but to fear the unknown. The expectations I am putting in her after all this time. That my greed, my love for her, may be the root of her pain. I tell myself that I would be ready to leave her, that I would be okay with protecting her from afar if it is better for her; but am I truly?

Hopelessly peculiar. That was all he could consider it when he discovered the journal, a journey he could not see with eyes he did not have, and yet when he touched it, he could see the words upon it in his very mind. What people considered to be magic, he supposed, for it was not his doing or the doing of the cultivation he had spent his lifetime learning about. More curious than all of that, though, was the fact that not all of the words were there at once. As he held the pages of the journal in his hands gently, he could see them in his mind's eye. Words. Appearing. Pauses as though the writer were stopping to have a think before the words continued.

Was there a person on the other side of it all?

Truth be told, Xiao Xingchen was not entirely certain what came over him as he picked up the brush he had intended to use, fine-tipped and used to write with ease for a blind man who had done it a thousand times before. Even then, he needed a touch of aid, his fingers skimming the edge of the paper and then crossing the surface, feeling for the shift in texture where writing already existed, confirmation that the words in his mind really were there on the page. And although Xingchen did determine exactly where the writing ended, when his own began, there was a notable lopsidedness to it all, slight but just enough that it would likely have been noticeable to the other party. 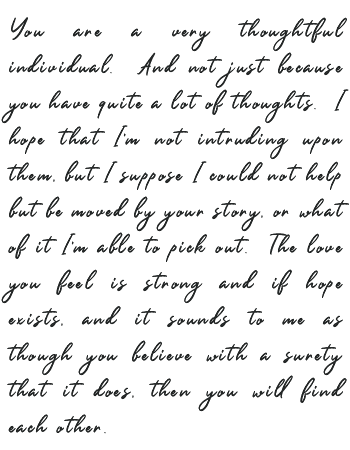 there is a considerable pause as Vlad tries to decide whether he regrets not having checked the packaging correctly - or that's what he concludes must've happened.

Oh. My apologies, I was not aware someone would read this other than myself. I may have given more explanation in that case. And likely not drawn it out that much. I easily get carried away writing about my late wife. She was the kind of diamond one only finds not searching for it.

Your words are kind, however; I cannot help but to appreciate them deeply, thank you. Ever since arriving in this strange world, I constantly wonder where the limits are of its magic - and, considering there was a time I did not believe in magic myself, the one here has nothing but amazed me so far.

Can I inquire who you are? You're not stuck inside the notebook, are you?
Reactions: Xiao Xingchen

I am not, no. Waiting for sunset, really, in my current apartment. Caged might not be a wrong descriptor per se, but certainly not inside a couple of pages. I can't even imagine that to be a predicament to wish on your enemies. At least not permanently.

Cabin, you say? I can imagine the serenity in the woods upon nightfall. Reminds me of home, in a way. The spring's breeze carrying the smell of the first flowers. The buzzing of insects.

Or is it a beach cabin? Do you hear the ocean from where you sit? 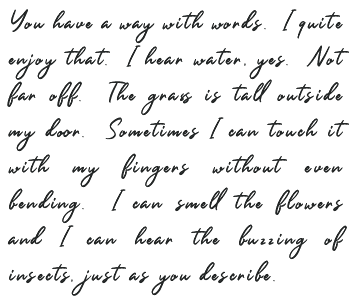 It's...a hobby of mine, one might say. I've picked up a thing or two in the years, certainly, but there are greater poets out there than me. Regardless, I'm glad my guess turned out to be so lucky. Can you imagined I had described a mountain path full of goats, bears and lions, and the distinctive smell of sulfur and sun-soaked stone one's forced into friction? A cabin in the mountains, hidden away from the weather and the sun, perhaps, even.

All I can hear currently is the AC, and two cats fighting over scraps on the roof further up. I think the older one is winning. Or, I suppose, there's also the family two stories down that are having a luscious dinner, two of the kids arguing over whether their mother picked one of them to help her prepare, or both.

You doubt it? Why would you doubt I can hear all of it from my apartment specifically? Is there something particularly soundproofing about an apartment that I don't know about? For all I knew, they were nightmares of sounds escaping to wherever you do not wish them to escape to.

And, most importantly, does it help that my window is open? Does that make it more believable ?
Reactions: Xiao Xingchen 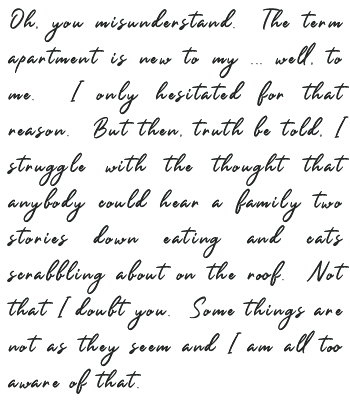 Oh, I see. My apologies, there was no intention to make you feel stupid. I was merely being confused, likely just as much as you were, even if out of different rea

Ah. I think one of them won now.

Are you? Aware of it, that is? I've noticed not many are, all to the unknowing ones' loss and danger, and sometimes mercy. Depending on which it is they take for what they see of it, when it really is not.
Reactions: Xiao Xingchen

Ah, yes. Whoever taught you that, did well to do so, in my opinion. It's a valuable lesson I learned far later in life. Maybe too late, in a way. At least despair's an efficient teacher, that is something, isn't it.

Not as efficient as loss is, I presume?
Reactions: Xiao Xingchen 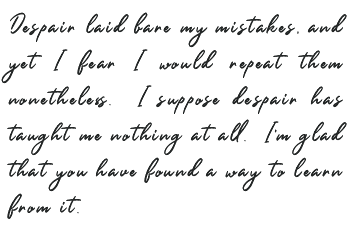 Despair is a cruel state of being, yes. It turns good men into monsters at time, even when the one thing they wanted to avoid the most, becomes the most powerful of its cards. Then again, it's what despair does. It's what it is. Motivating and baring fangs all the same.

You've been quite evasive so far, you do realize that, do you not? While I won't attempt and still my hunger for knowledge forcefully, I'm yet ever-so-curious about you.
Reactions: Xiao Xingchen

A name to call you by if you give it - if only to stop thinking of you as mysterious notebook letter penpal in my head, but then again, you may be content with that. A random fact about yourself, perhaps? Tell me something about a friendship that means a lot you, or about a moment you felt most creative.

Well, it's nice to make your acquaintance then, Xiao; as much as the other nickname had a ring to it, I think I prefer this one. I've had many names in the past, a downside of my life, I presume, but you may call me Vlad.
Reactions: Xiao Xingchen 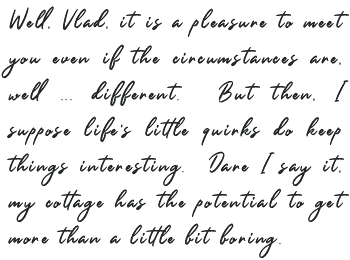