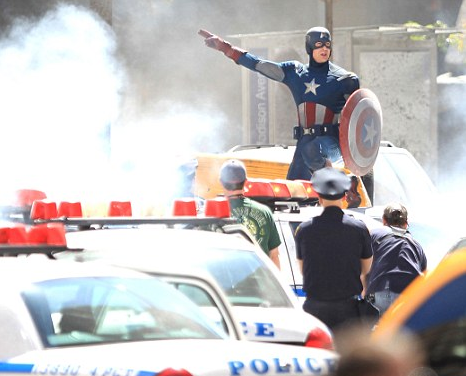 July 28th, Y108​
Shots fired and one explosion were reported in the afternoon of July 28th in the shipping yards of Ark City's Radical Pointe district after what seemed to be a raid conducted by a red white and blue costumed vigilante to rescue three women and two men in a human trafficking scheme. The victims Annabelle Rievens, 23; Michael Michaelson, 22; Gly'byorb Mi'milmin, 34; Kyouko Hashimoto, 25; and James Franco Madison, 19, were recovered by Ark City police officers that afternoon unharmed.

Eyewitnesses to the scene stated that another person had possibly assisted in the trafficking raid, but police had found no evidence upon that claim. The hero in question, identifying himself as 'Captain America' to reporters on the scene, had this to say: "It's hard for people to get settled here when people like [traffickers] come out and antagonize that peace." He went on to say that "[he] was going to be wherever they were at the root of the problem" and stated that "if anyone is ever in need of people they can trust, trust in Sword & Shield."

In accordance with Ark City's civilian arrest laws, the vigilante was not detained by police.

The traffickers have been stated to allegedly be at the forefront of a dangerous gang stemming from the Dread Wastes. Police, however, have refused to answer questions at this time.​
OOC INFORMATION

After the opening of the Sword & Shield security company, the undercover vigilantes' first undertaking was launched by Steve to rescue trafficking victims, but he was joined by a surprise ally, @Manfred von Richthofen, who worked with the Captain from the shadows in this endeavor.​

Futaba Sakura
Horoscope: Make up your own constellations, pray to your own gods, command unknown forces of your own divination. Steal from everything. This is real magic.
Tuesday at 1:15 PM •••

Futaba Sakura
Shampoo for the real friends, real poo for the sham friends.
Monday at 3:09 PM •••