Age
too old to mention 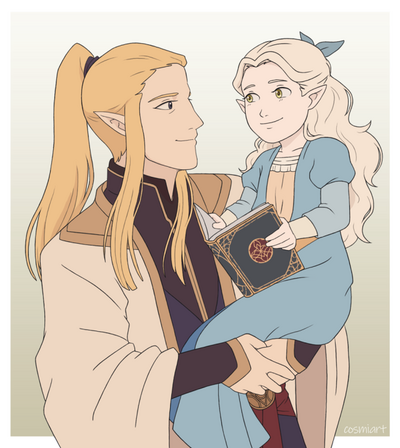 Fandom: DOTA: Dragon’s Blood
Age: It’s not ever revealed but I’d judge he’s some 1000 years old due to him being an adult elf
Species: Elf
Gender/Pronouns: He/him
Canon Point: Before the present day story line, when he’s trying to save his daughter’s life
NPC Companions: His young daughter Filomena


SKILLS & ABILITIES
Special AbilitiesWithin the Invokers canon magic power is drawn from how much knowledge can be drawn in and remembered to craft a spell, most mages within canon only know three or four spells but the Invoker is known for having memorised more than ten, thanks to his thirst both for knowledge and magical power. Among these spells the most powerful would be his use of three specific magics which are the basis for most of his combat spells:

He can also blend these magics in a spell known as the invoke, which allows for the more powerful attacks to be used.

He is also shown to have further magical abilities of note:


 Filomena’s AbilitiesShe appears to have some powers that have to do with plants, meaning she can create both plant species which she has made up or already exist. As a demigod child of one of the moon goddesses her powers strengthen under the moonlight. But generally she is too young and inexperienced to do anything beyond the creation of the plants.


WEAKNESSES
Should the Invoker be forced to do powerful magic such as an astral projection or a complicated combat spell, it leaves him weakened and exhausted until he rests for long enough to replenish his energy which leaves him vulnerable to others who wish to harm him. As much as he thinks himself all powerful the Invoker is actually limited in his abilities especially as is demonstrated in his inability to heal his daughters disease, thus meaning that there are gaps in his knowledge and power that could leave him weakened if they are targeted.

If the Invoker is forced to do martial arts styled combat rather than magical he is at a severe disadvantage as his fighting style is limited to the basics so if he were to have to fight a skilled combatant he would be easily defeated. Though he is an elf granted the gift of eternal life, if he were to take serious mortal damage to the point he is too weak to heal himself he would die. He could also die if exposed to diseases or serious sickness, as his healing ability is his weakest talent

 Filomena’s weaknessesHis daughter Filomena is a young child of what looks equal to about a five year old child or even younger possibly, which means she lacks experience or maturity to survive on her own despite her intelligence. It also means that physically she would not be able to go toe to toe with an adult determined to hurt her. On top of that she has not yet developed any combat abilities magically and so would receive no aid there meaning she is very much dependent on her father to protect her.

She is also suffering from a mysterious disease which is sapping her strength and slowly guiding her towards death, this in itself is probably her greatest weakness as on a bad day she can hardly stand because of it which leaves her vulnerable.

PERSONALITY
As befits someone as powerful as the Invoker he is often quite full of himself, viewing most beings as beneath him and not worth his time on top of this arrogance he holds himself with a deep seated level of pride. It is hard for him to ask for help or admit he was wrong to the point he will try everything else before turning to either of those options. He also holds grudges for slights against him for the longest time showing his long memory for past mis-deeds done to him, however he cares little if he has done a mis-deed to someone else and they hold it against him, showing how hypocritical he can be. The Invoker is also a man hungry for knowledge so as to strengthen his own magical power, so if he sees a magical ability he has yet to master that will strengthen his arsenal he will do all he can to learn it.

He can also be very cold to outsiders, wishing they would leave him alone to his books and studies to the point of doing anything to be rid of what he’d view as an annoyance. Despite all this the Invoker has a softer side which is reserved for those he cares about such as his daughter who he dotes on. He will put aside his pursuit of knowledge just to do things that make his daughter smile, such as play childish imaginary games with her or take her out for fun adventures. He demonstrates this softer side to those who manage to break past the aloof, arrogant outer layers but this is a rarity and he prefers to maintain himself as an occasionally polite, occasionally cold mysterious figure

The Invoker is a very intelligent man able to play all sides in political situations and yet somehow appear to be a wise friend to all. With this charisma comes the fact that he is prepared to play the long game to get what he wants and has the tactical skill to lead any side he allies with to victory, one just has to become the being he is actually fighting for first which may seem an impossible task as in reality the only people the Invoker fights for are his daughter (who he would literally destroy the world for) and himself.

 Filomena’s personalityUnlike her father Filomena is a sweet young girl whose only desire is to please her father and receive her mothers love without having to make an oath of devotion to her. She is bubbly in nature but also has her father’s bookish ways, always having a book on plants on her person where she has scrawled in a messy childs script all her own magical notes in regards to her creating a flower that would attract her mother’s attention.

She is also shown to be kind hearted, asking after others and wishing only happiness upon them. However she is shown to be stubborn and sometimes brattish as befits a child of her age, though her father can usually bring her out of these moods. Despite her father being the figure of authority in her life she has him wrapped easily around her finger as he would do anything for her, yet she does not often use this to her advantage but the ability to do so is always there.

ROLEPLAY SAMPLE
He was sat at Filomena’s bedside, a book across his lap, his pale blue eyes were on his daughter’s sleeping form. He’d been reading her a bedtime story, hoping to ease her into a peaceful sleep while being fully aware that the disease that marred her perfection and sucked at her lifeforce could wake her from her slumber agt any moment. For now though she slept, pale blonde hair splayed across the pillow in beautiful waves and seeing her like this, so peaceful, lost in some fantastical dream he felt a brief moment of peace. But the illusion was shattered all too soon as she rolled in her sleep exposing the diseased purple bruise like mark creeping down her right forearm, pain sprang into his heart and a grimace found its way onto his face.

Kael shifted in his spot on the side of the bed, closing the book that had been on his lap. He knew he should return to the library where he could continue his search through all the magic texts to find something to help his daughter and yet he was loath to leave her. With all the research he’d been frantically doing, with her health declining at the rate it was he was barely getting to see her as she was often confined to her bed more often making it difficult for her to join him while he searched. So all he did was shift slightly to ease the book onto the bedside table, where it brushed against his daughter’s book of flowers. For a moment he hesitated, then Kael was taking his daughter’s book into his hands and settling at her side once again. Opening the book that Filomena was so fond of he started to read, his hand running over her messy child handwriting a small smile now managed to find its way onto his lips as he descended into the peace of the moment in his daughter’s presence.

Then the next thing Kael knew something was shaking him, his eyes cracked open to harsh sunlight and drowsily came to the realisation that he must have fallen asleep at his daughter’s bedside. “Papa! Wake up! You’re doing an illusion in your sleep again!” Filomena was frantically shaking his shoulder, her voice was loud yet somewhat gentle. Shifting slowly into an upright position he fought the urge to tell her that he’d never done that and that it was near impossible to do, except now that he was upright Kael’s gaze was landing on their surroundings. They were not in Filomena’s bedroom in the hidden tower anymore, as that knowledge hit him he found himself shooting to his feet in alarm, one of his hands taking one of his daughters as he did so. “Papa!”His daughter was crying out in surprise but for the moment he had no response for her as he continued to take in their situation with alarm, his only thought was that it was some ploy of Selemene’s, the goddess was certainly strong enough to magically pull them from their sanctuary and petty enough to leave them vulnerable out in the open.

ChangelingChilde
I could really use more stuff to do with Palmer, if anyone's interested in plotting?
33 minutes ago •••