Status
Not open for further replies.

Pandora can be compared to a patchwork quilt where each piece of cloth was taken from another quilt and sewn into a random place among the rest. Each piece might have made sense in its original place, but thrown into Pandora they feel jumbled and topsy-turvy. Though the world of Pandora is divided into distinct regions, the actual landscape within these regions varies and rarely makes sense. There might be a stretch of rainforest with a random patch of desert in the middle, or rolling grasslands might give way abruptly to arctic tundra. There’s no rhyme or reason to how Pandora is put together because it didn’t evolve naturally or with any thought to logic. It was created by a Pantheon that slapped things together out of whim and impulse. Occasionally the Pantheon is even known to rearrange things. What was a field of wildflowers one day might be a small lake the next. Large-scale changes are rare, but small-scale shifts happen all the time.

The landscape isn’t the only haphazard thing about the Box. As a whole, Pandora is chaotic and unpredictable. This is especially reflected in its weather patterns (or lack thereof). One might be standing on a perfectly warm, sunny hill but looking out across a field ravaged by hail and thunder. The only constant is that the weather seems to follow seasonal norms to some extent. For example, during the summer the majority of the region will be warm… though one might stumble upon a random section of the forest that’s inexplicably covered in snow.

People, animals, and objects have also been known to appear, disappear, and reappear. This is most notable in how a person might disappear from Pandora and reappear later with no memories of ever having been there before. The only hard and fast rule in Pandora is that nothing is predictable.

The world of Pandora is divided into four major regions, each with their own quirks. The Pantheon has structured each region after a major era or — one might say — genre.

The Crystal ValesThe Crystal Vales are located in the southern stretches of Pandora’s Box and are bordered to the northwest by Centria and to the Northeast by the Dread Wastes. The Vale is well-known for its vibrant landscapes and diverse life. Magic is prevalent across the region to varying degrees. Some places are brimming with magical phenomena and creatures, while other areas are more grounded in reality.

 CentriaLocated in Pandora’s northwestern region, Centria borders the Dread Wastes to the east and the Crystal Vales to the south. Centria is by far the most settled region in Pandora’s Box. It’s filled with cities, towns, and villages of varying sizes. Centria is a veritable melting pot of races, cultures, and lifestyles. No two settlements are alike. Citizens of Centria pride themselves on their high standard of living and economic and technological success.

 The OtherworldWhile the Pantheon has cut off access to other worlds and realities, it has gathered a plethora of pocket dimensions into a place known as the Otherworld. The Otherworld isn’t any singular thing — for some it’s a world of dreams, for others it’s a bit of extra space to store their items out of sight and mind until they’re needed.

 PandopolisIn the center of it all lies a sprawling, patchwork metropolis known as Pandopolis. Considered the “hub city” of Pandora, Pandopolis is where everything comes together. Portals to each of the other major cities can be found here for quick travel around the world. The city is an eclectic mix of architecture and cultures from all kinds of different worlds and eras. An ancient stone church might sit next to a hotdog stand, both across the street from a towering, futuristic communications building.​
Last edited by a moderator: Sep 13, 2018
Reactions: Jen and GhostOfHalloweenPast

Perhaps one of the strangest features of Pandora is the wall. The world of Pandora is literally within a box, with perhaps an open globe on top that holds the Cosmic Wilderness. On the borders of the Box itself, however, are the walls.

The walls are invisible from a distance, and instead feature an illusion of the world continuing on as normal, as if it were a spherical one. If someone finds themselves within a few meters, however, they’ll find a shimmery wall rising up as far as the eye can see.

The ceiling of the Box has the same wall, though the ceiling creates an illusion of a normal sky, with a normal cycle of a sun and moon. At night, stars fill the sky, creating strange and wondrous constellations. However, the sun, moon, and stars are merely an illusion. The only thing that isn’t an illusion, strangely enough, is the second moon that is only sometimes visible. In reality, that is the space station, Elysium, and it is only visible when it is hovering near Pandora’s Box.

From the Cosmic Wilderness, Pandora looks like a perfectly square box. It is not a round planet. Its walls are shiny and solid-looking, while details of the Box’s interior appear muted.

Characters can arrive via the vines anywhere in Pandora, at any point in the current season. They might pop up somewhere in the wilderness completely removed from civilization, or in the middle of a crowded restaurant. Characters can also disappear from Pandora just as abruptly. Most of the time, when a character appears in Pandora, they have no memories of their prior experiences here. But there have been cases of characters who remember bits and pieces, or even the entirety, of their previous stay here.

Pandora’s Box comes with an auto-translation feature. While characters continue to speak in their own native language, they’ll also hear everybody around them speaking in a language that they can understand, if not necessarily recognize. The only exception to this is when a character’s speech pattern is one that generally can’t be understood by the audience or is a character trait in itself (such as Groot’s “I am Groot”). Titles, honorifics, spoken spells, or anything that is used for flavor will also remain untranslated.

Written language, however, is not translated. This has caused much of the Box to rely on magic, technology, symbols, or pictures for public signs, menus, and the like.

There is no one universal currency in Pandora. Instead, each region has its own unique currency.


With the exception of The Dread Wastes, all of these currencies can be easily exchanged and converted in Pandopolis, Centria, and The Cosmic Wilderness. Crystal Vales can only convert coins and has no use for paper money. As for those coming from The Dread Wastes, they can only hope that whatever items they have with them are of some value at their destination.

Travel options available to the people of Pandora varies widely by region, and many public transportation options don’t cross regional borders. However, the easiest and quickest way to get around is by using the Portals located within each of the hub cities. Cascade Bay, Lethe, Elysium, and Ark City all feature a portal with an aesthetic that matches the look of the entire region. Each of these portals takes the traveler straight to the Portal Hub in Pandopolis. From there, all they have to do is enter the second portal to their final destination. Of course, the portals don’t help people who are traveling anywhere that isn’t one of the hub cities.

There are very few consistencies in Pandora, and even aging is not counted among them. People who arrive in Pandora often eventually find that they no longer age, and thus people dying of old age within Pandora is a relative rarity. There are some, however, who do age as normal. So far, there no rhyme or reason has been discovered as to why some age and others don't. Just another of Pandora's mysteries.

New intelligent life is also not created within Pandora. While not sterile, people just seem unable to procreate. Even artificially created lifeforms prove to be a failure, as no "soul" ever joins it and the lifeform is left as nothing but an empty husk. As such, there are no natives to Pandora. Every single person anybody ever sees in Pandora is somebody who arrived from outside of the box, even if some may claim otherwise.

One interesting note, however, is that animals that are not counted among the intelligent population -- both wild and tamed -- are able to reproduce. Some theorize that this is for the sake of farmers within Pandora, allowing them to deal in livestock without worry of livestock going extinct.

Last edited by a moderator: May 21, 2020
Reactions: Jen and GhostOfHalloweenPast 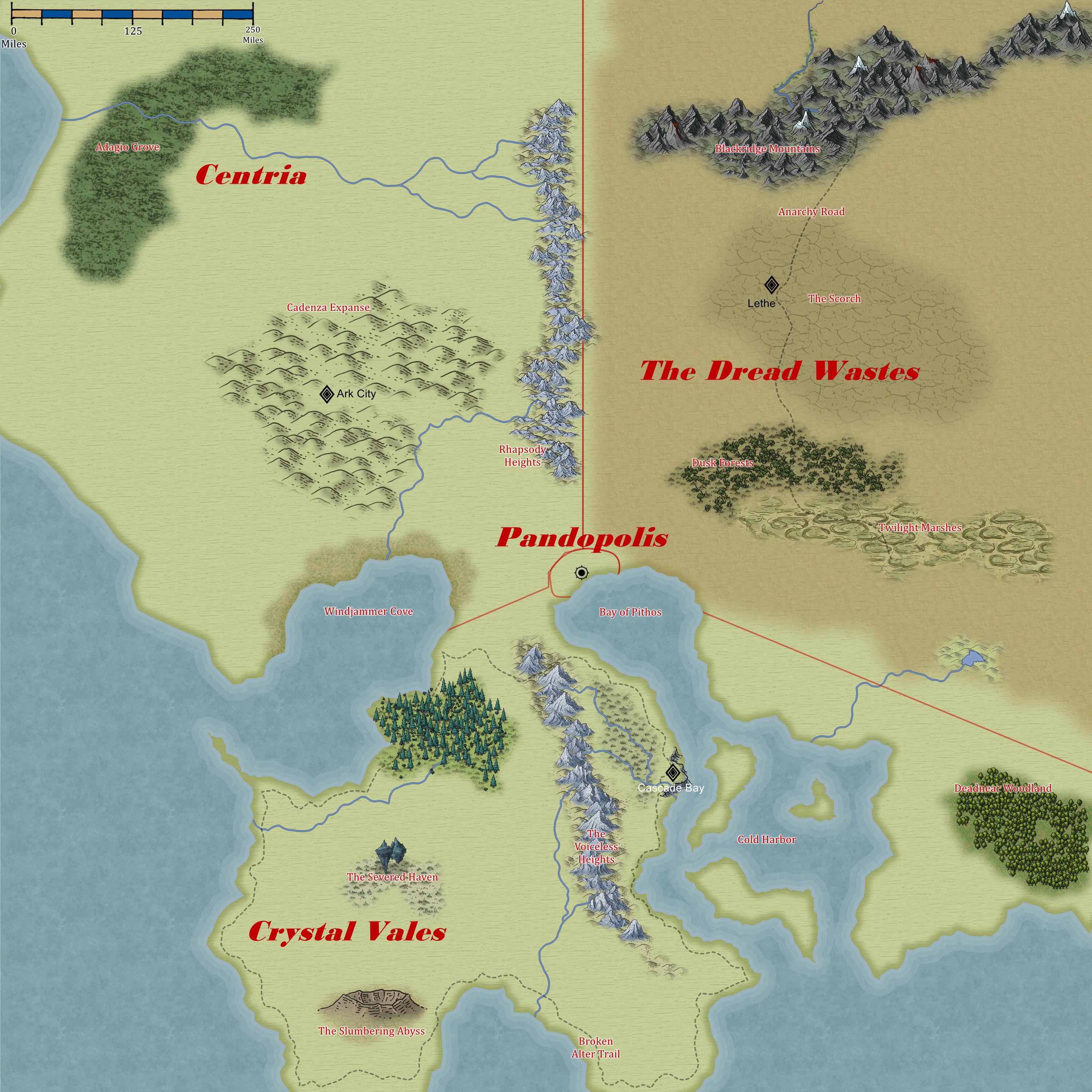 Status
Not open for further replies.

theweasleyboys
//So Oscar got Chaotic Good in the legendary Alignment Test. What I do with this information is now a Work in Progress...//
Yesterday at 7:50 AM •••

Ursiel
Hey broskis. Sorry I've been borderline AWOL for the better part of a year. Things have been a little meh and I feel like I'm stretched so damn thin right now. I wanna come back and write with you guys again, but idk when that's gonna be. Hope you're all doing well. <3
Yesterday at 4:03 AM •••