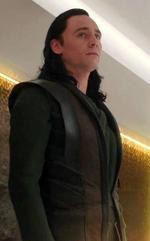 The God of Lies did not even have to unlock the door of his house. His loyal butler had already been waiting for him. As soon as he stepped close enough, the wooden surface slid open in order to offer access to the hall of the manor without any delay.​
‘Good evening, sir.’ The man greeted with a soft bow of his head. ‘I hope you had a productive day. The maids have prepared your chambers for the night.’ He spoke while reached out with a hand, taking the Asgardian’s coat. ‘Dinner is almost ready.’​
“Thank you, Alfred.” Loki walked towards the living-room with his bright green eyes scanning the room. “Has Lady Jasnah retired?” Despite feeling quite certain concerning the hour of his arrival, still he glanced at the large floor watch at the far corner.​
‘I’m afraid so, my Lord. She has been studying a lot lately and spends a respectable amount of time in her quarters.’ The trickster listened very carefully to the comment and realized how lonely her future wife must have felt during his prolonged absence.​
The prince offered a nod of acknowledgment before finally responding. “No one is to interrupt us.” Then he climbed the stairs which led to the second floor. After pausing for a brief moment at the corridor, he approached Jasnah’s bedroom and knocked.​
A soft breath escaped from the back of his throat. He had not been around the woman in weeks and his inappropriate actions during their last meeting seemed to haunt his thoughts. Yet, she had asked him to return home and he had decided to grant her wish.​
You must log in or register to reply here.
Share:
Reddit Pinterest Tumblr WhatsApp Email Link

Tired Old Soldiers
O-o; I swear I posted something but it ain't showing. Anywhoo.... I'm finally back in the saddle and would love to get some plots going with Jack again. I'm unfortunately dropping down to 1 character because current events have spiked work too much for me to be confident beyond that... But if y'all want to plot with my grumpy old soldier, lemme know!
Today at 5:12 AM •••

Hal Jordan
shout out to all the kids running for Gen Sec. don't ruin my democracy please and thank you.
Today at 2:29 AM •••

Rune
I am apologizing for this past month with posting guys. Bunch of stuff happened and the month went away from me.
Yesterday at 1:55 PM •••

Futaba Sakura
Grand opening at Cave of Wonders today. Come by, play some games, have some coffee. It's fun. :3
Yesterday at 11:15 AM •••