Tired Old Soldiers
Gonna try to do some posts today. Work slammed me hard yesterday so didn't get as much done as I wanted on here while there. ><
Yesterday at 3:40 PM •••

Jace
hey psst, react to this for a text thread! (also comment if there's anyone in particular you're wantin')
Wednesday at 8:55 PM •••

Severen
ah hate it when they ain't been shaved
Wednesday at 6:40 PM •••

Private you can try but you can't break me down 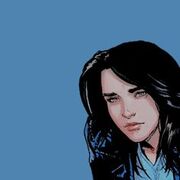 Jessica could only watch as Trish was pulled away, the vines wrapping around her and taking her away and Jess had screamed and cursed and tried to stop it. At some point, she wasn't sure when considering she had been drinking far too much, the vines had grabbed her too and shoved her back almost immediately.

A different Jessica, one who left Trish being taken to the helicopter to the Raft except she had all these memories she wasn't sure why - except that was a lie. She knew, the memories surfacing, telling her why and what was going on and that was all it took before she punched a hole in the wall. Avril was hiding under the bed, with Kayser coming to rest upon her leather clad shoulder.

Generally she would deal with this by drinking, and while she had done that earlier in the day(?), she knew that this went beyond her. Reaching out to someone else never really was much of an option even if she knew she had friends that would be there for her. She tended to deal with things herself and bottling it all up inside. Not exactly healthy, it was just what she did, even when she was younger.

Debating on it took a while, and it was near dark when she had gotten up and left the apartment she had shared with Trish, closing the door with a thud and not bothering to lock it. Leaving her apartment, she made her way to where she hoped Karen still lived, realizing she had last contacted her before the holidays. That had been a week ago now, and instead of the atmosphere being cheery and happy, the air around her was depressive and solemn. Even Kayser wasn't too willing to pay much attention to her just for that fact.

Or maybe he was mourning the loss of Trish too.

Steeling herself, the woman knocked against the door, hoping that this was the right one and when the door opened, Jess found her vision blurry with tears she didn't want to shed. "She's gone. Trish was taken by the vines."

She'd only just got him back. Just like that, Pandora had decided he be pulled back into the universe, away from Pandora. Away from her. She'd lost the two men she'd loved, really loved, and for the first few days, Karen had wondered if this was some kind of punishment. It wasn't like she didn't deserve it. Her own stupid choices had caused the death of her brother, Ben and Father Lantom. She deserved this heartbreak. She deserved to be alone.

But rationalising it didn't stop the pain. Karen hadn't left the flat in three days, crying and drinking for the most part. Every inch of this flat had memories. Frank's clothes were still in the wardrobe, and sometimes she'd sleep in them and pretend he was still there. They had his scent and it lingered on her for days.

She'd managed to shower today, but it didn't stop her from bursting into tears. She knew she should get out the flat, make it to work and get on with life. But it wasn't that easy. Grief had grabbed her by the throat and was throttling her. Pulling on some old pyjamas and not bothering to brush her wet hair, Karen fell back into bed, wishing to escape. She was almost in a dream when she heard the knock at the door.

It took a few moments for Karen to muster the energy to get out of bed. Her apartment mostly still in darkness, Karen headed to the door and opened it to find a distraught Jess on the other side. "Oh, Jess," she started, the shock at seeing her friend so vulnerable when she was normally so strong. Without saying a word, she pulled her into a hug. "Come in."

She guided Jess into her living room, which was littered with empty bottles of whiskey and wine and magazine strewn all over the floor. Karen hasn't bothered to clear up her mess. She hadn't cared much about anything until now.

Jess let herself be pulled into the hug, glad of the warmth it provided. She had been so used to having someone constantly around that the absence was noted immediately. No extra sounds, no cuddling up against Trish during the night, no thinking about how lucky she was.

Now that was gone and Jess was left back in the cold. She held onto Karen without breaking her bones, not using even half her strength as if everything that had happened had zapped her of all energy and will to live.

Inside the apartment, she was face to face with pretty much her own mirror. Knowing the telltale signs of grief and loss because this was exactly how she coped, and she latched onto this. Because this meant she could avoid her own emotions and focus on something else. "You lost someone too, haven't you?" The pang of guilt that hit her for not keeping up with her friends.

It was a wonder she actually had friends.
Reactions: Karen Page

Karen was scared. She'd never seen Jess like this, not even when Jess had tried to drink herself into oblivion and Karen had had to force to eat. She'd still had a bit of life in her then. Now, she was broken. Completely broken, as though she'd lost her fight. Her spirit. So when Jess fell into her arms, Karen hugged her tight, supporting her as they headed inside.

But even when broken, Jess could see how much pain Karen was in. Not that she'd tried to hide it. Karen didn't have the strength either. She closed her eyes and nodded, tears already threatening to fall. "Matt," she said simply, her voice cracking under his name. "He wasn't here long, but I..." Karen inhaled a breath. This was the first time she'd said his name out loud to anyone, even spoken about his loss. "I thought I had him back."

She shook her head, sitting down on the sofa and bringing Jess down with her. "What happened?" She asked, determined not to fall apart. She needed to be there for Jess. Maybe they could support each other through this. "When... When did it happen?"

whiskey cavalier​
"I'm sorry." Jess hadn't even known that Matt had been here, and it honestly made her feel pretty shitty. She didn't blame Karen for not letting her know, it should have been up to Jess to reach out. Even so her voice was sincere, truly sorry for what had happened and knowing exactly how it felt.

Trish was here, here and they were going to be happy. There was a bitter expression as if she had eaten something sour as she sat down, trying to sort out her emotions that considered mostly of grief.

"Trish got taken back by the vines." Jess leaned back against the sofa, even speaking the words caused her heart to ache. "Yesterday? Today? I'm not sure. Because after she went home, I was taken home and then thrown back." What was worse was the fact that she knew what awaited them. Trish's own path to self destruction.

And she was getting better here. This place gave her a chance that New York tore apart.
Reactions: Karen Page
You must log in or register to reply here.
Share:
Reddit Pinterest Tumblr WhatsApp Email Link
Top Bottom